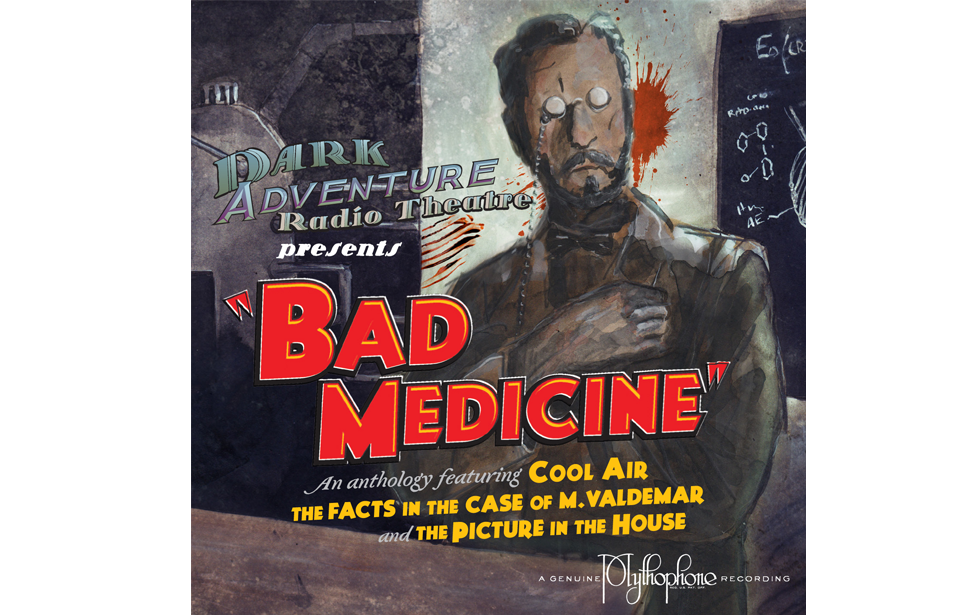 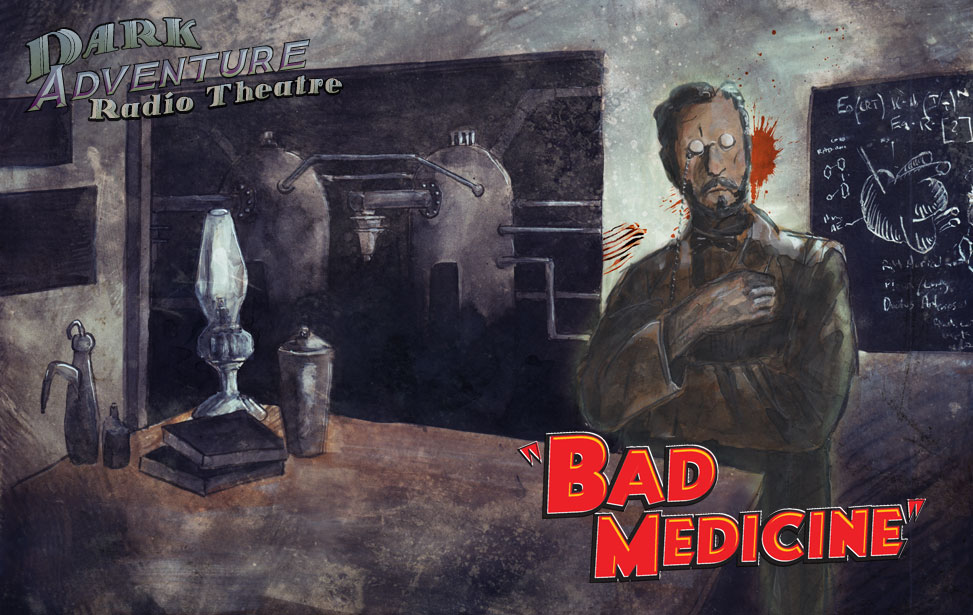 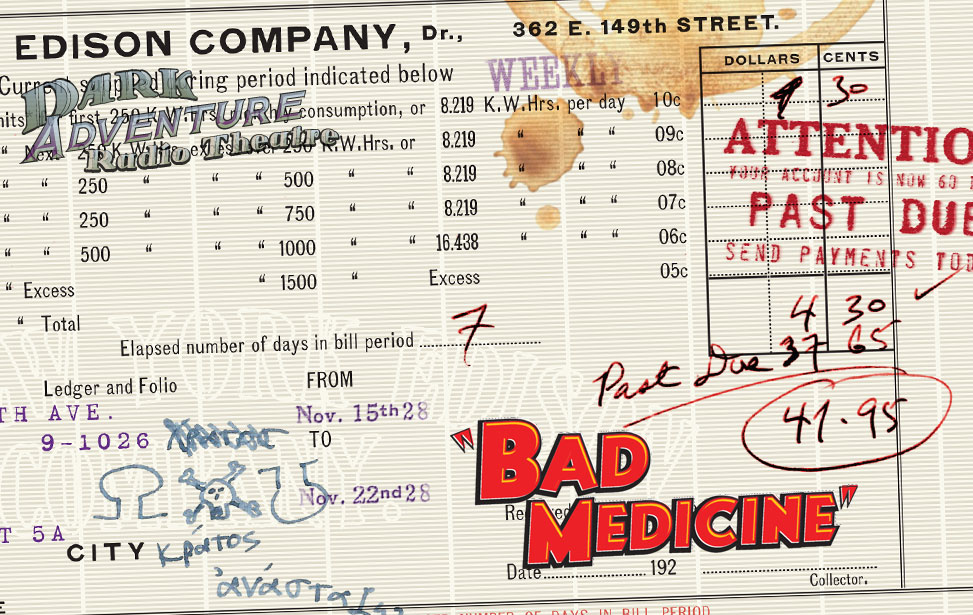 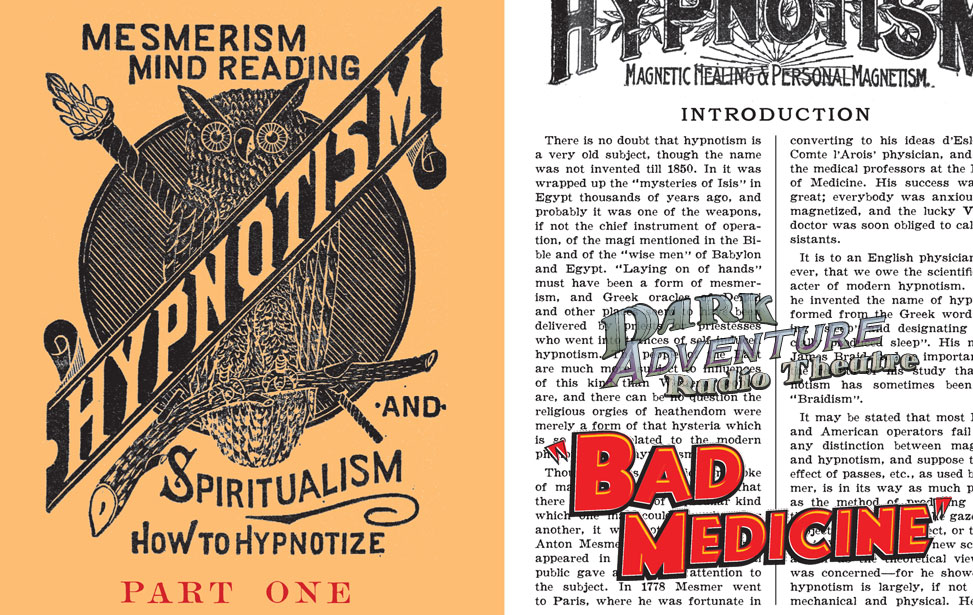 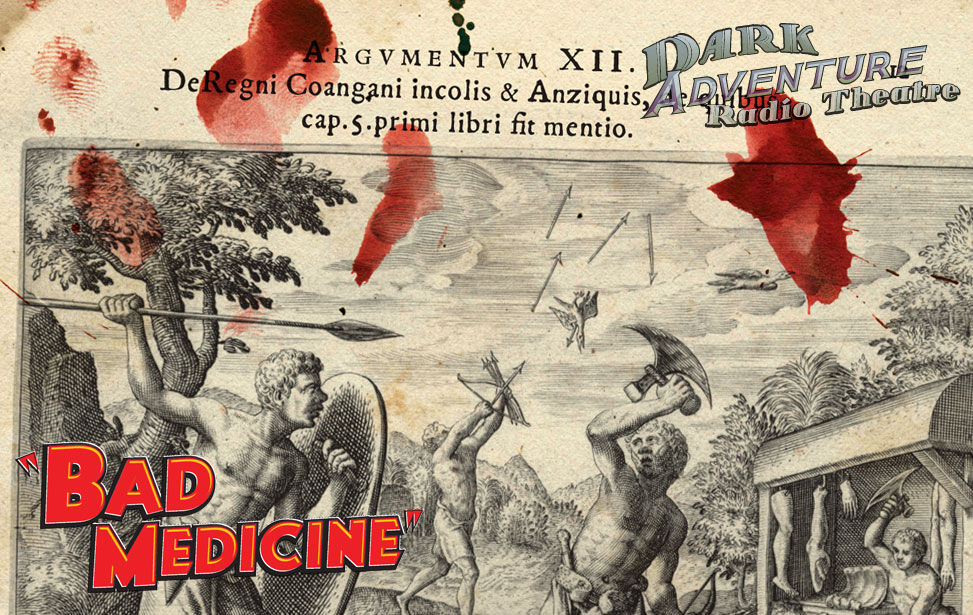 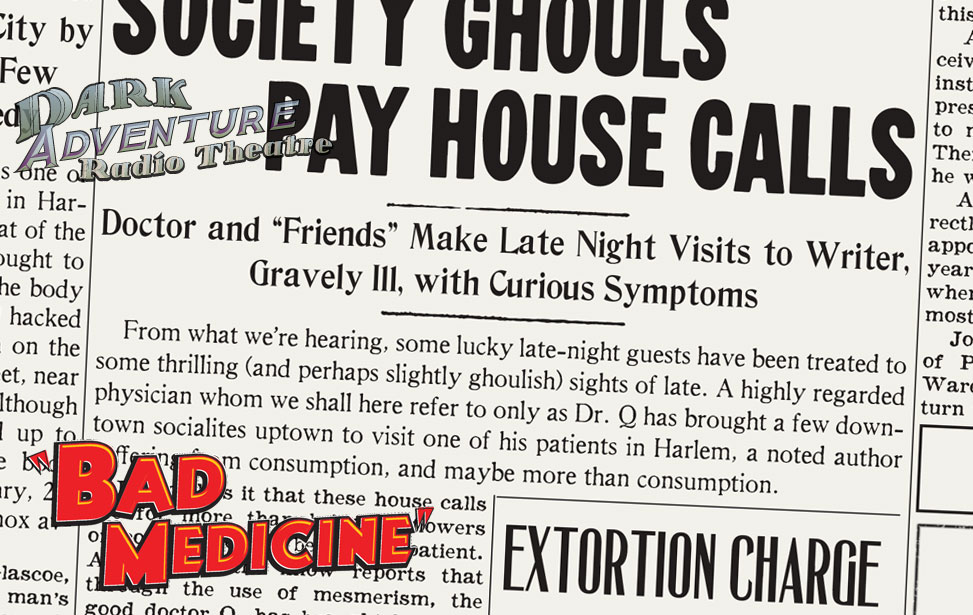 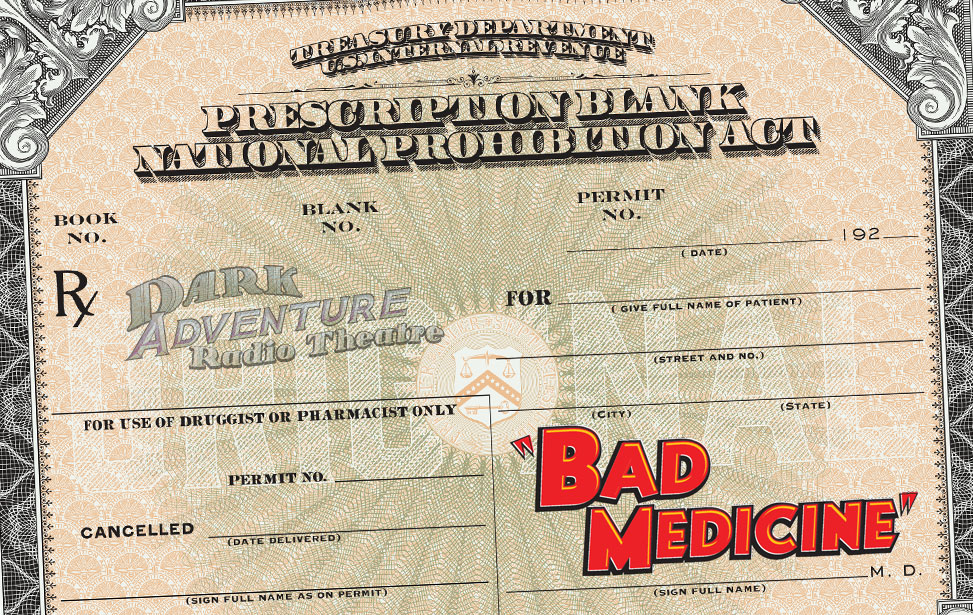 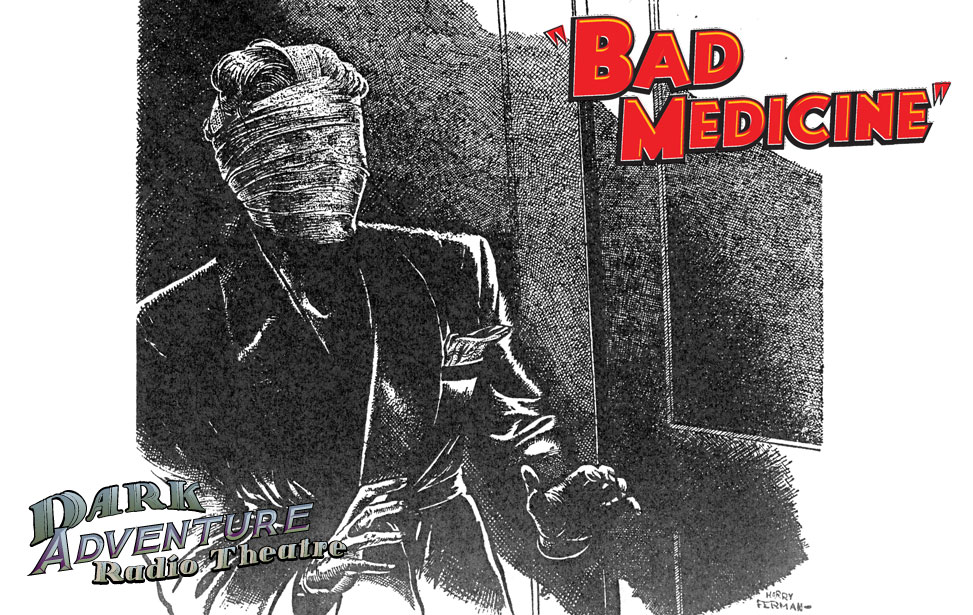 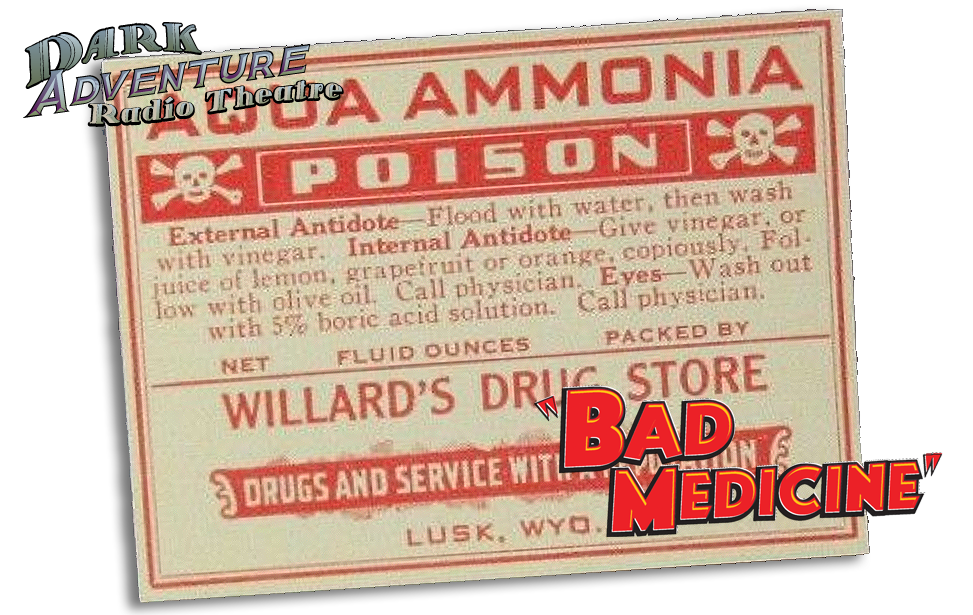 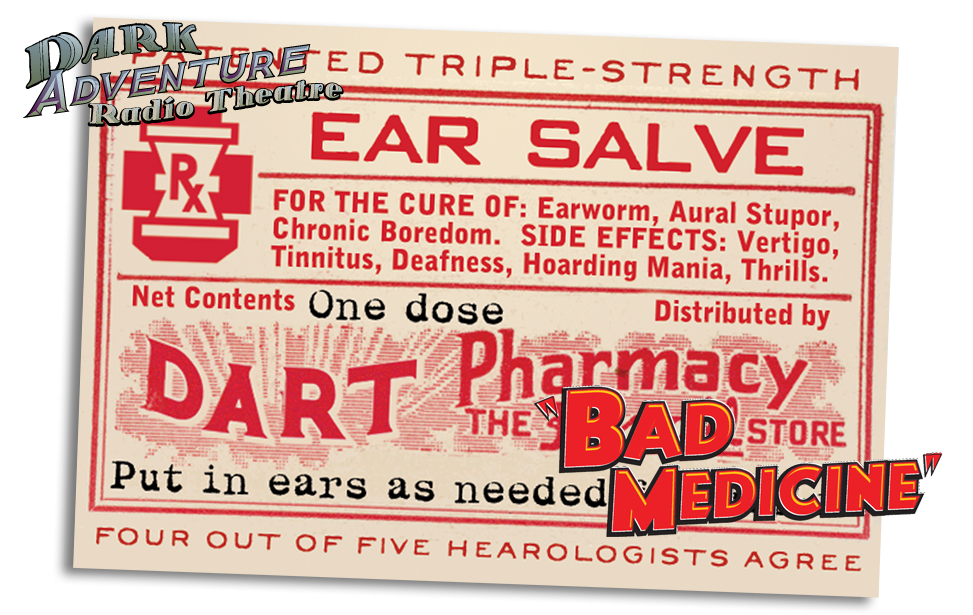 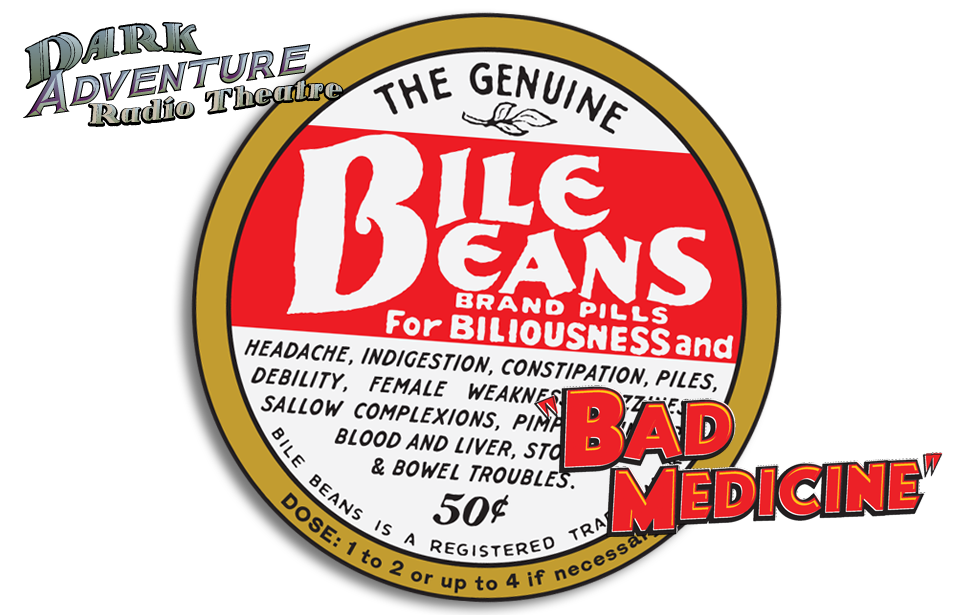 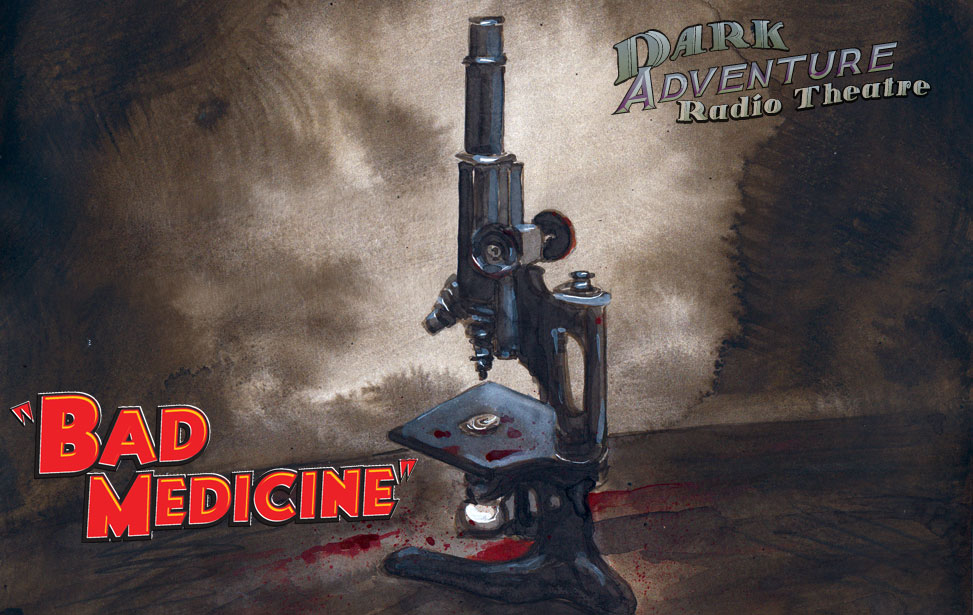 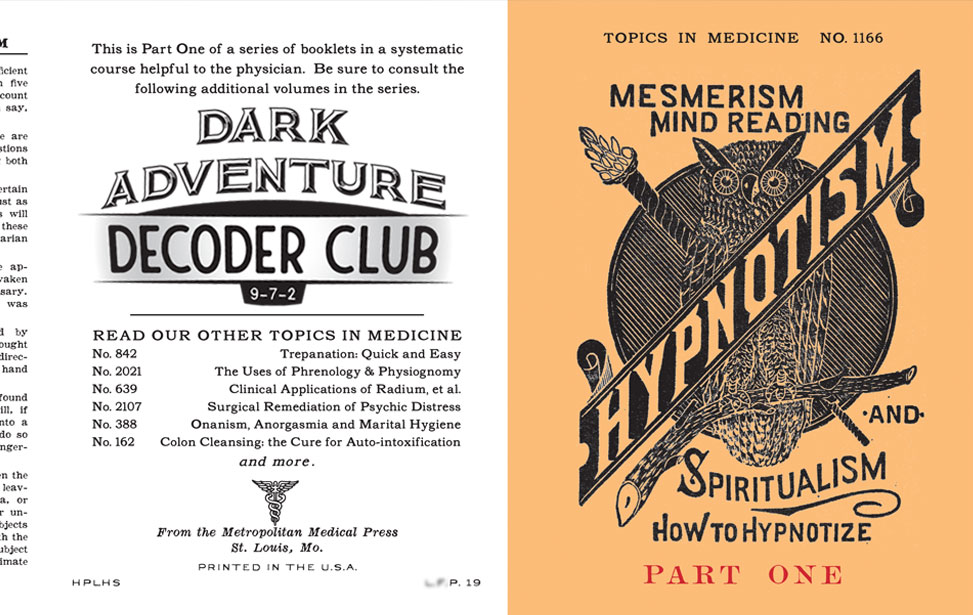 "My venerable colleague went to extraordinary lengths and used archaic processes to prolong my life."

Maintaining good health has never been easy, and people have always fallen for crazy quackery like snake oil, radium salts, and uncountable others. The health insurance system of today has many flaws, but it did not exist at all in Lovecraft’s time, and even good medicine could be pretty horrifying. People would try absolutely anything to avoid illness and death and doctors, and this theme joins the three tales in this anthology episode.

Bad Medicine brings together three tales of unusual doctors and their even more unusual treatments. Can an aged physician stave off the grasp of death in “Cool Air”? Will a determined mesmerist unlock the mystery of mortality in “The Facts in the Case of M. Valdemar”? And can an alienist free a young man crippled by horrifying memories in “The Picture in the House”?

Please note the version of "Valdemar" featured in this episode has new material not included in the free download version.

To enhance your listening pleasure, the HPLHS will pack the jewel case for Bad Medicine with carefully created props from the story. You'll get:

Based on "Cool Air" and "The Picture in the House" by H.P. Lovecraft and
"The Facts in the Case of M. Valdemar" by Edgar Allan Poe
Written by Sean Branney & Andrew Leman
Original music by Reber Clark
"Dark Adventure Theme" by Troy Sterling Nies
"The Bile Bean March" performed by Reber Clark
Vocals recorded at The Jungle Room, Glendale, CA
Audio engineering by Ben Soldate and Jeff Stone
Cover and disc illustrations by Darrell Tutchton
Prop Inserts by Andrew Leman & Sean Branney
Penmanship by Jay Stigdon
Research assistance by David G. Cercone II
Thanks to Kevin Miller and the Huntington Library
Special thanks to Wellesley Chapman, M.D. and Dan Anderson, M.D. 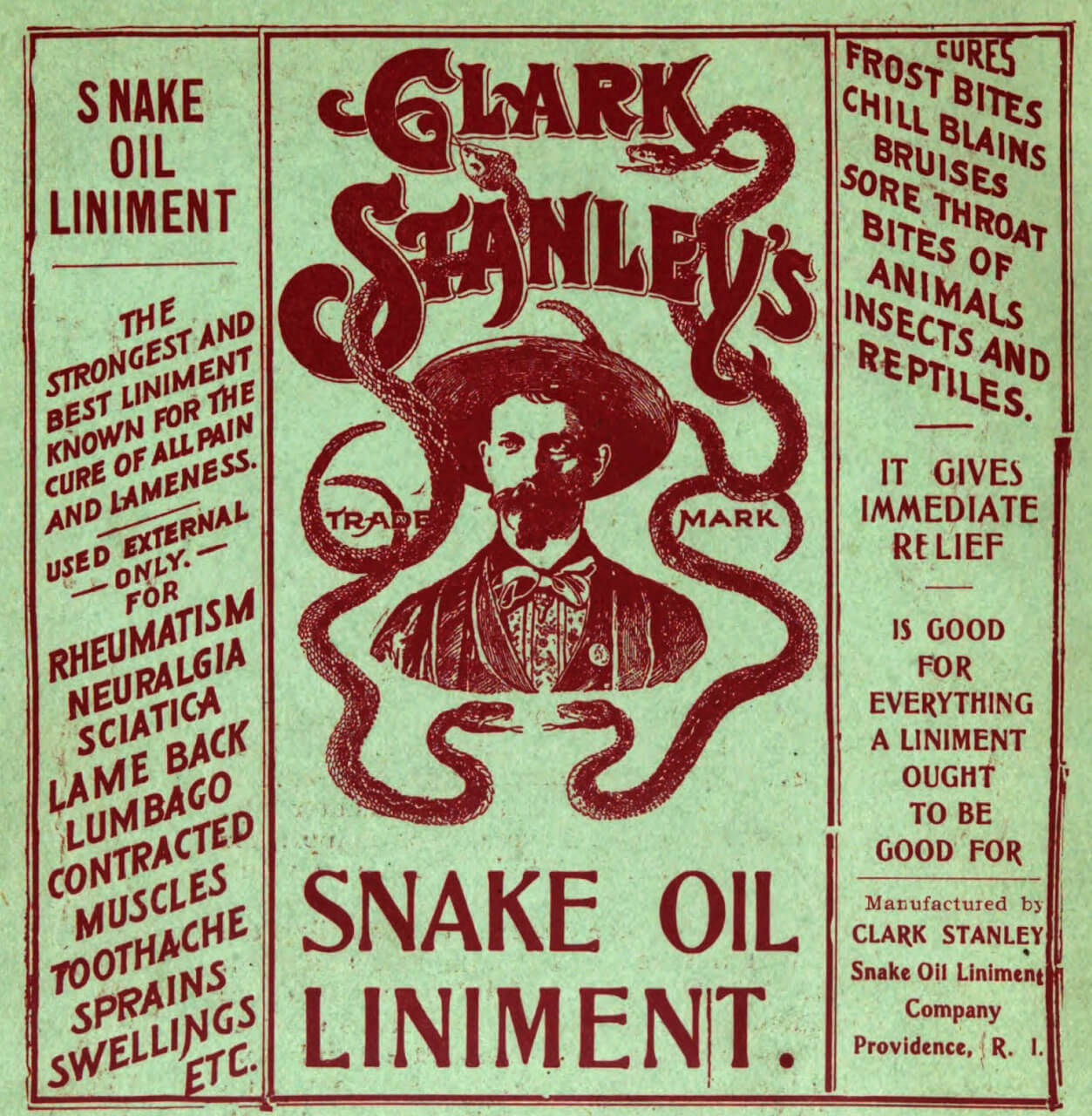 Although it has long been a generic term for any quack cure or bogus product, "snake oil" was (and is) an actual thing. It was originally made from actual snakes as part of Chinese traditional medicine, and was brought to America by immigrants working on railroads in the 19th century. Hucksters of all kinds ran with the idea, and one famous brand was the one pictured here, Clark Stanley's Snake Oil Liniment. It was manufactured in Lovecraft's hometown, Providence, R.I., and did not contain any snake ingredients. Clark Stanley, "Rattlesnake King", was sued by the US Government for deceptive marketing in 1917 and fined $20.

Because Lovecraft had never seen a copy of Regnum Congo when he wrote "Cool Air", or perhaps just because he was taking dramatic license, his description of the book is not terribly accurate — which is ironic considering that he knocks Theodor de Bry for basing his engravings on poor second-hand descriptions. For one thing, all the plates were at the back of the book, and there were only fourteen of them, so Plate XII is actually almost at the very end, not in the middle as described. Here's a look at some of the other plates that the creepy old man enjoys looking at. 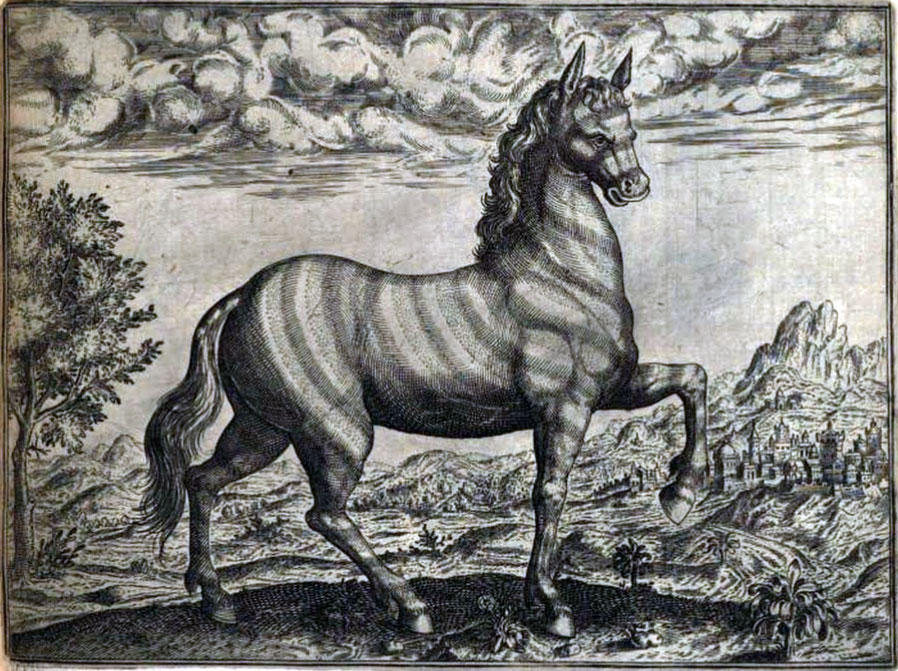 Here is Plate IX: a zebra as drawn by someone who has never seen one, but to whom it has apparently been described as like a horse but with stripes. 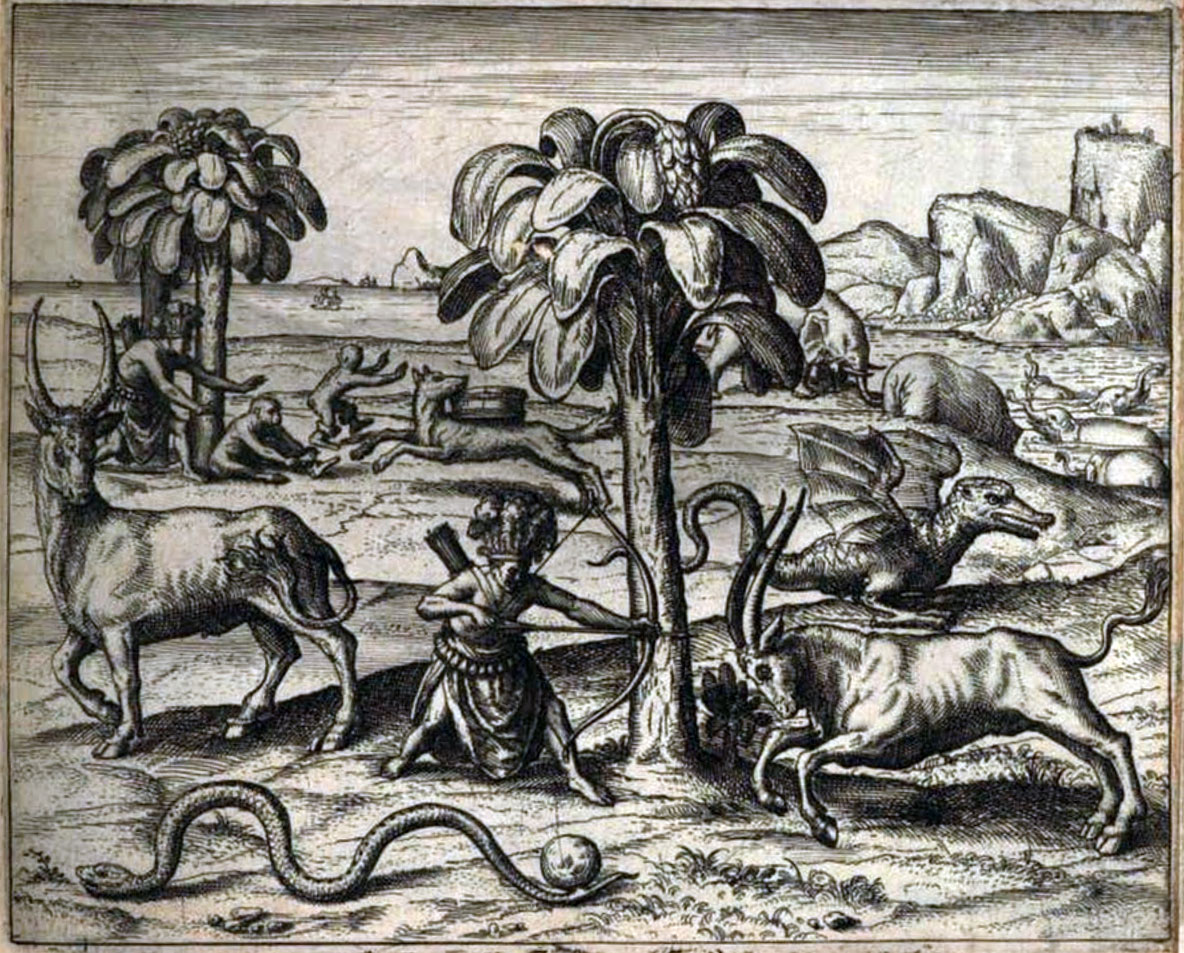 Here is Plate XI: featuring a tree with "big leaves a-floppin' over and daown", and a creature like "a dragon with the head of an alligator", and a person that the ignorant old man might mistake for an "Injun".

You can see all the other plates and read Regnum Congo at Google Books. 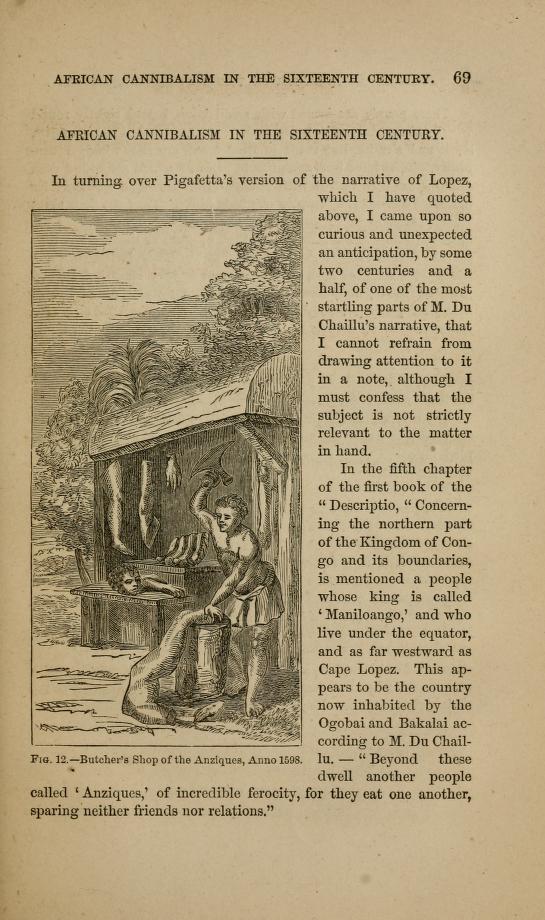 Even if he hadn't ever seen Regnum Congo, Lovecraft might have had a glimpse of at least the most interesting part of Plate XII, because it was reproduced in a book by Thomas Henry Huxley published in 1863 called Evidence as to Man's Place in Nature. It was the first book ever to tackle the subject of human evolution directly, and the first part is entitled "On the Natural History of the Man-Like Apes". At the end of that section is a picture of the Anzique butcher shop, taken from the original de Bry engraving. The Huntington Library has a lovely copy of Regnum Congo itself, and we would like to thank HPLHS Member Kevin Miller for helping us to get a good look at it.

You can read "On the Natural History of the Man-Like Apes" at the Internet Archive. The detail of Plate XII is on page 69.

If you think Bile Beans are bogus, they are nothing compared to some of the bad medicine that was advertised in Lovecraft's day. Here is a 1925 newspaper ad for a Chlorine bomb: one of a thousand "treatments" that promised to prevent or cure the common cold. Developed by people at the US Chemical Warfare Service looking to improve their public image after WWI, it was a glass ampoule containing actual Chlorine gas you were supposed to inhale after breaking the glass. You could get one at Walgreens for 29 cents. 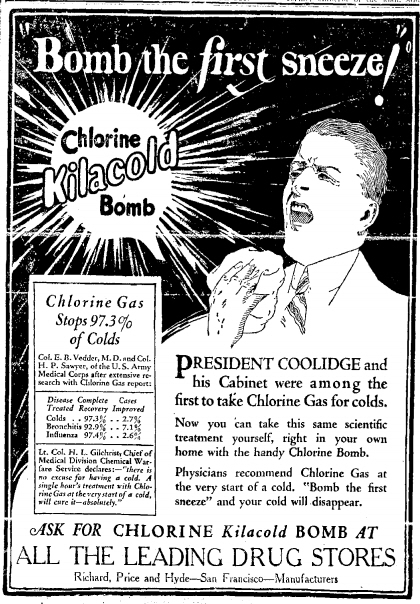 You can learn more about Chlorine bombs and other insanely bad medicine at The Quack Doctor. 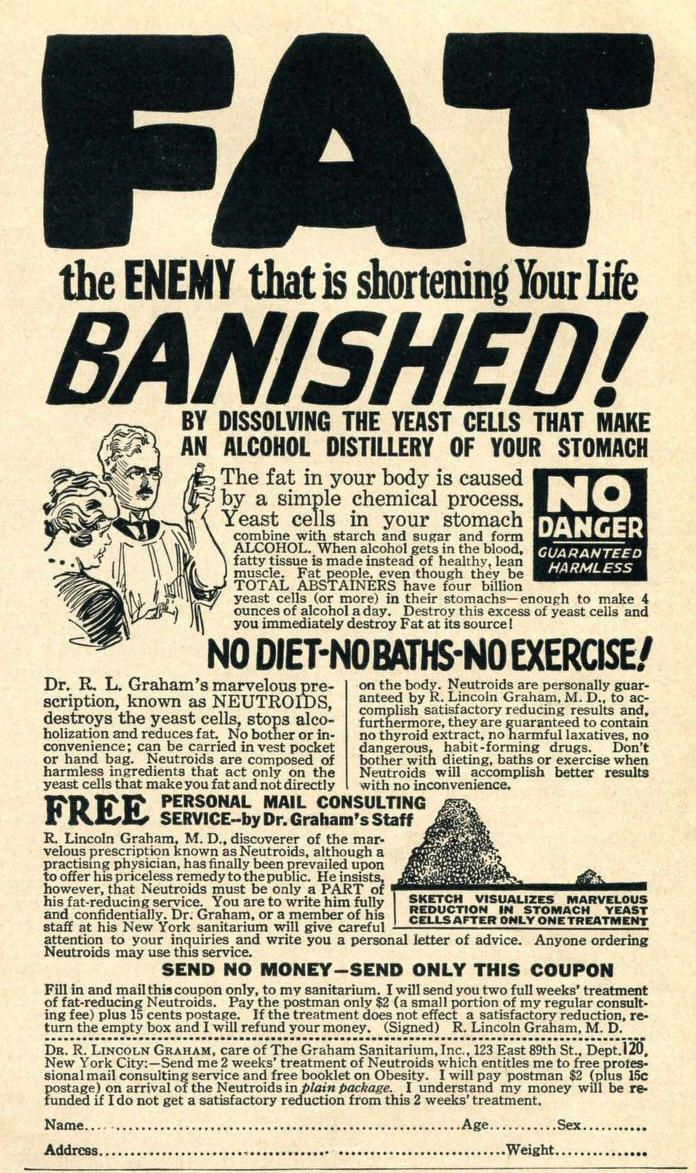 Losing weight is not easy for most of us, so hucksters have been shilling bogus reducing pills, potions, devices, and schemes forever, promising to make you healthier and sexier without having to actually do any work or make any sacrifice. Here is an ad from 1923 for "Neutroids", one of the endless litany of empty weight-loss promises. Nowadays we all get 100 of these every day in our e-mail. 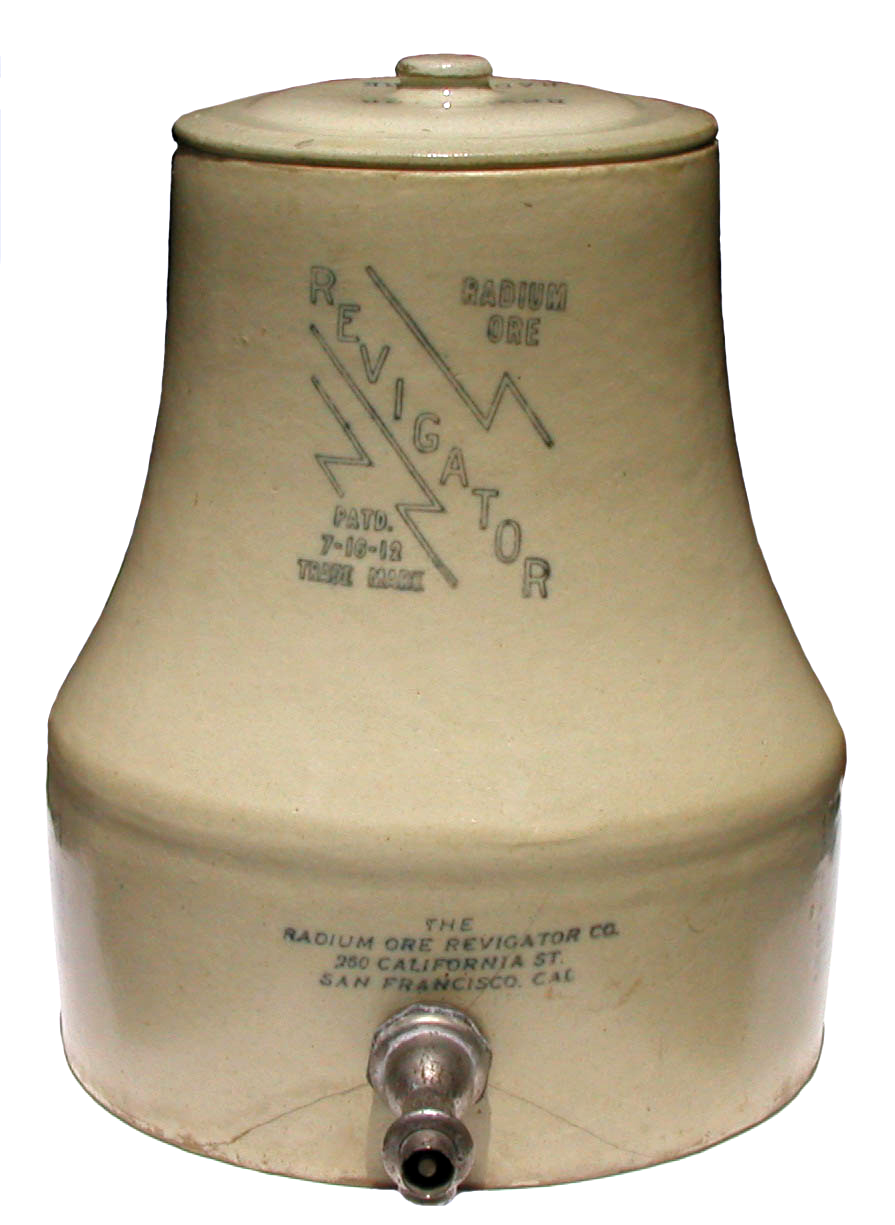 Another trend in bad medicine in Lovecraft's day was radioactivity. Radioactivity was discovered in 1896 (the word itself was not coined until 1899) and in the early 20th century it was not yet understood that exposure could cause cancer and kill you. On the contrary, it was sold as a cure for arthritis, flatulence, senility, fatigue, impotence and anything else you could think of. There were radioactive toothpastes, pads, tablets, bath salts and creams, and — perhaps most popular — radioactive drinks. The Revigator, shown above, was a ceramic water cooler lined with uranium and radium that was very popular from 1923 until people started dying in the early 1930s. You would fill it with water and overnight it would zap that water until it was five times more radioactive than currently accepted maximums. If you didn't want to go to all that trouble you could just buy bottles of water that were already radioactive. One brand, Radithor, was marketed as a "Cure for the Living Dead". Noted Philadelphia industrialist Eben Byers drank it by the gallon, until he had so much cancer that parts of his jaw had to be surgically removed. After he died in 1932 he was buried in a lead-lined coffin, and radioactive water dropped in popularity. You can read more about radioactive beverages at Popular Science, and find an astonishing gallery of radioactive products at Oak Ridge Associated Universities.

The Pure Food and Drug Act

When Lovecraft was a boy, food and drugs were almost completely unregulated, and "medicine" could contain anything — or nothing — and chemicals like borax and formaldehyde were used as food preservatives. Opiates, cocaine, alcohol and cannabis were all pretty much legal and were ingredients in many kinds of remedies, including ones for children. Newspapers made a lot of money from ads for patent medicines, so they seldom published stories exposing them as bogus, or calling for any standards or legislation. In 1906, under President Teddy Roosevelt, the US finally passed the Pure Food and Drug Act. The focus of the law was on accurate labeling, and it only applied to drugs that crossed state lines, but it was the first real attempt to protect public health from egregiously bad medicine. The federal office devoted to food and drug safety at the time was the Agriculture Department's Bureau of Chemistry, which was reorganized into the Food, Drug and Insecticide Administration in 1927, and later into the modern FDA. When Prohibition began in the US in 1920, alcohol was illegal nationwide, but you could still get it with a doctor's prescription. Prohibition ended in 1933, and alcohol became easier to get while other addictive drugs became increasingly inaccessible. 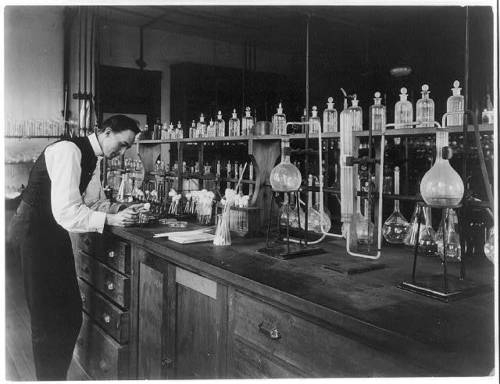 Dr. Muñoz had a number of very interesting books in his library, including De medicinarum compositarum gradibus investigandis, or "Research on Degrees of Medical Compounds", also known as De Gradibus. Written by the amazing 9th-century Arab scholar and philosopher Al-Kindi, it applied mathematics to medicine, quantifying the strength of drugs and estimating the most critical phases of illness, among other things. Abu Yusuf Yaʻqub ibn ʼIshaq as-Sabbah al-Kindi was a titanic figure who contributed to many other fields, including cryptography, chemistry, astronomy, philosophy, and metaphysics. He was kind of like John Dee and Abdul al Hazred combined. Tragically, most of his works fell into obscurity after his death and have been lost due to religious fanaticism, the destruction of ancient libraries, etc. But if you have a few thousand bucks to spare you could get a book at the Librairie Melchior that includes at least some of De Gradibus. If so, maybe you could donate it to the HPLHS Library!

For your enjoyment, we present free PDF downloads of the final recording script and liner notes of "Bad Medicine". Note: this script is only for use for reading along with Dark Adventure Radio Theatre; no performance of the script may be made without written consent of the HPLHS. 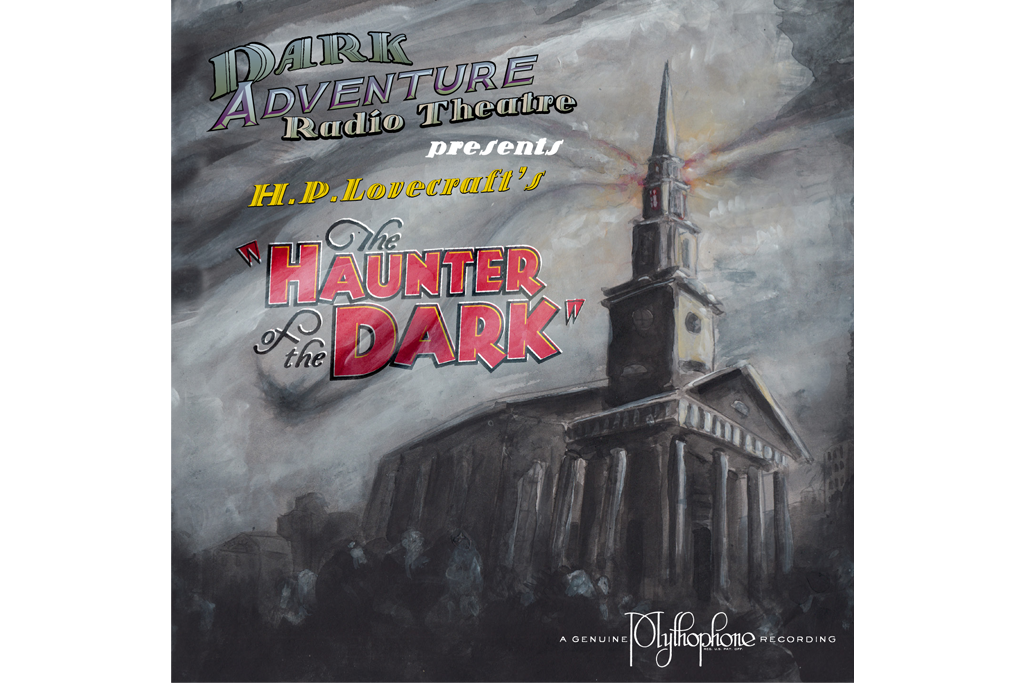 Episode 17
The Haunter of the Dark 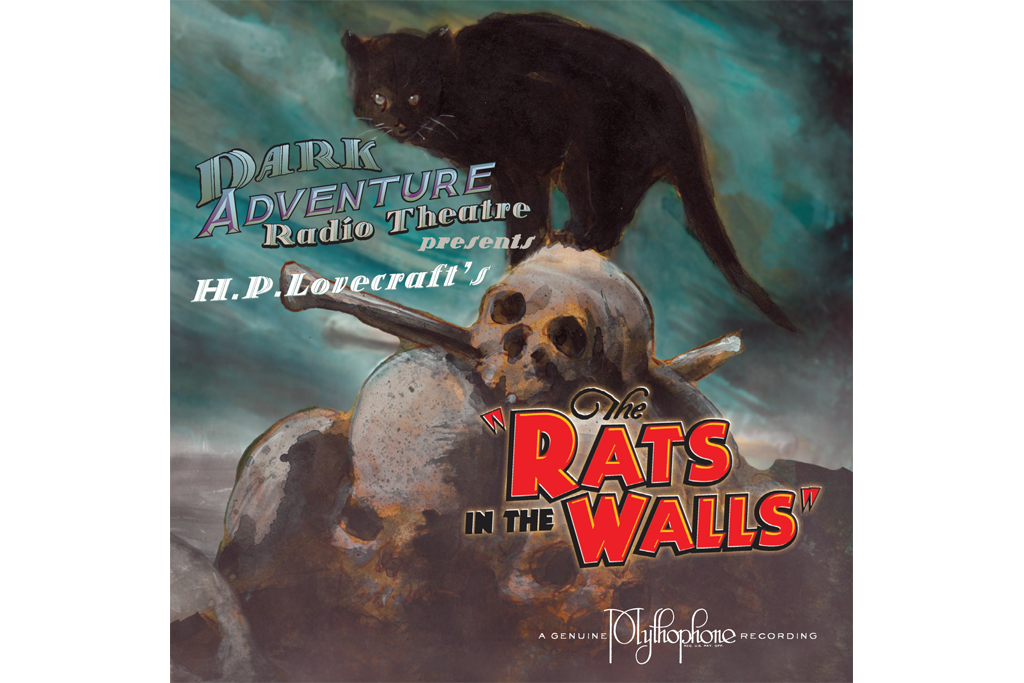 Episode 18
The Rats in the Walls 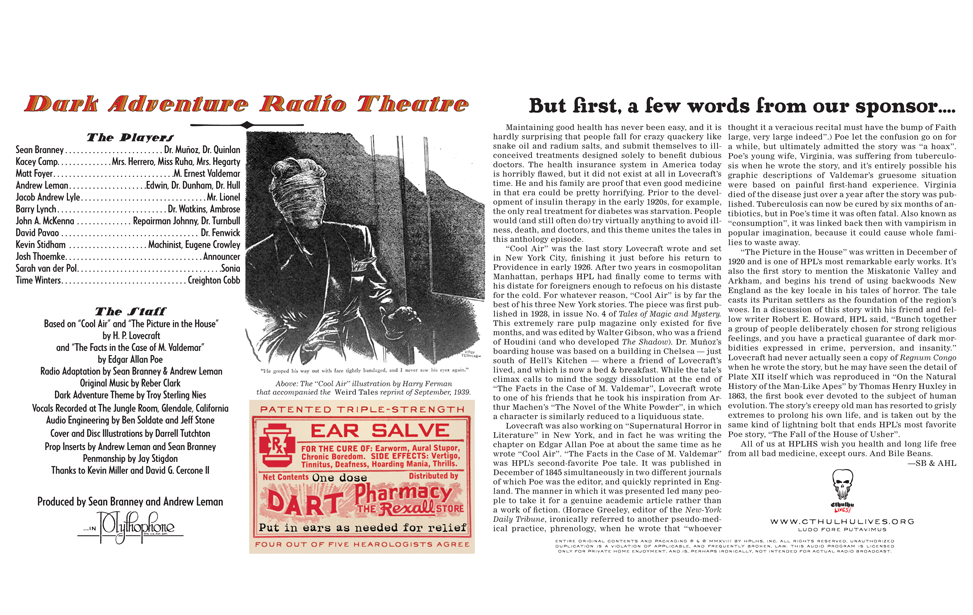