A Shoggoth on the Roof 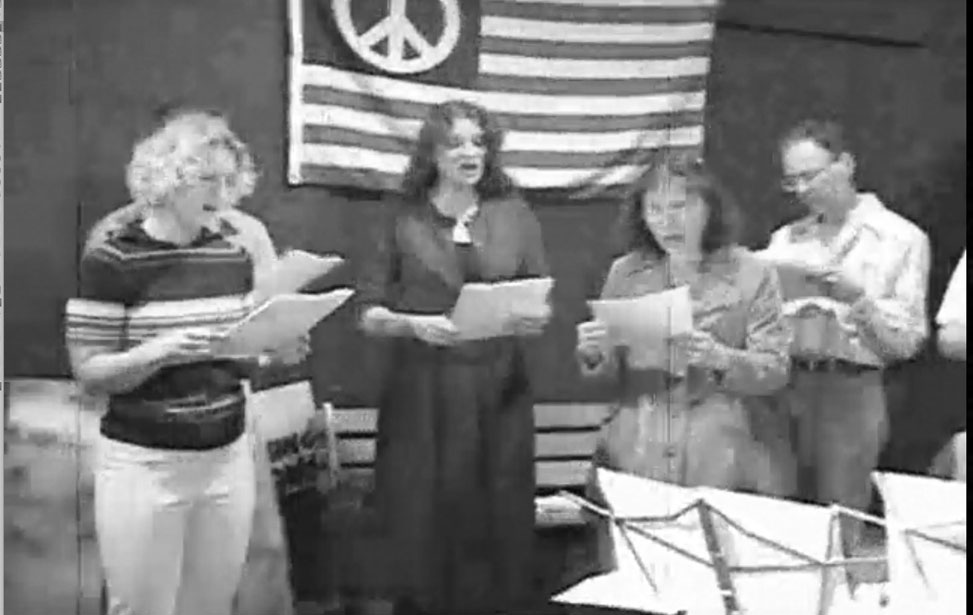 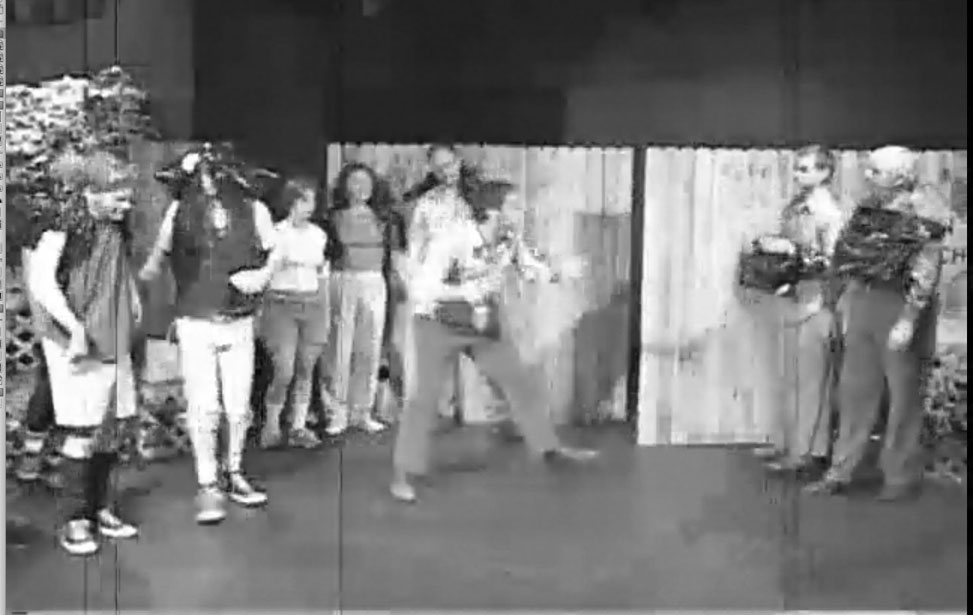 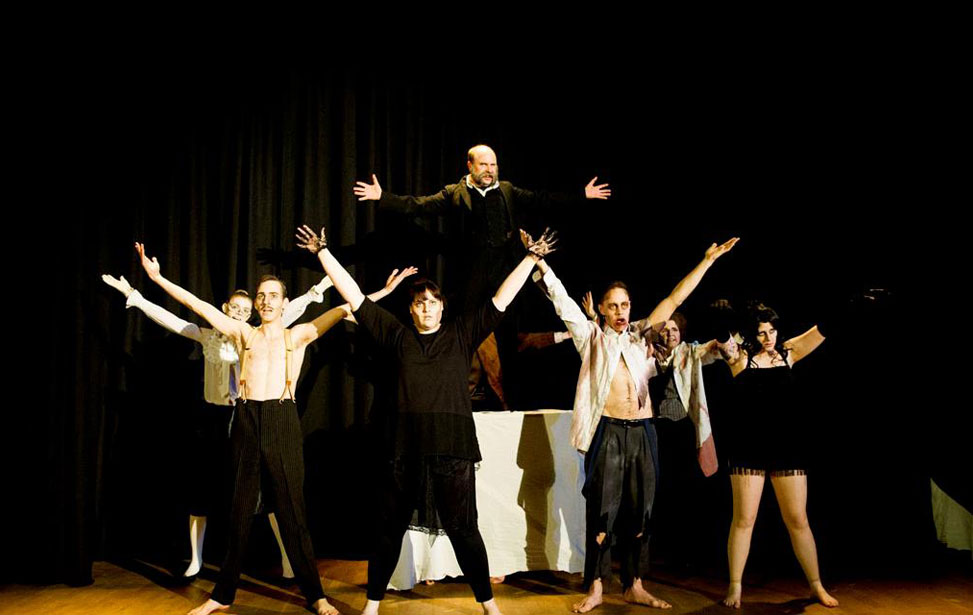 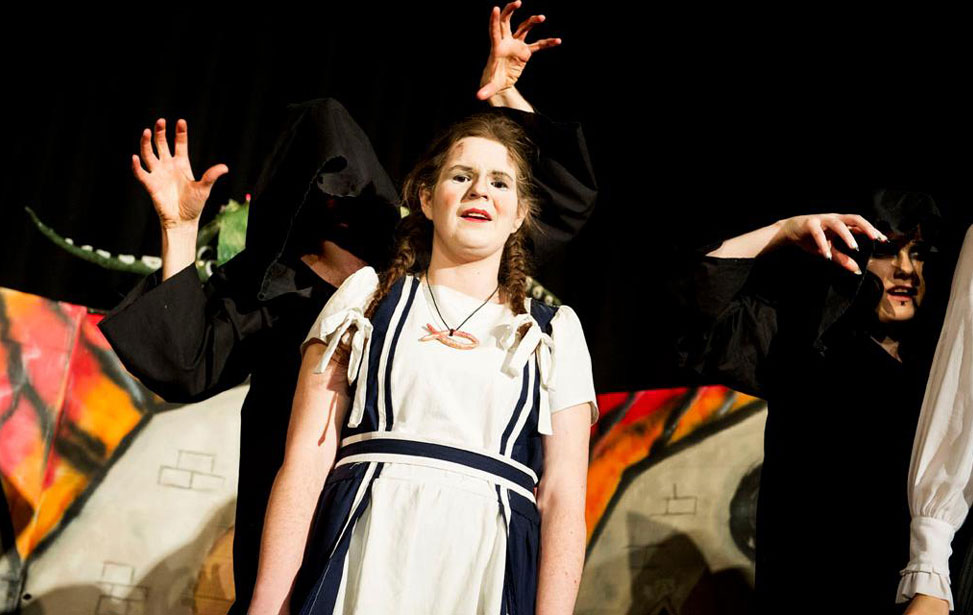 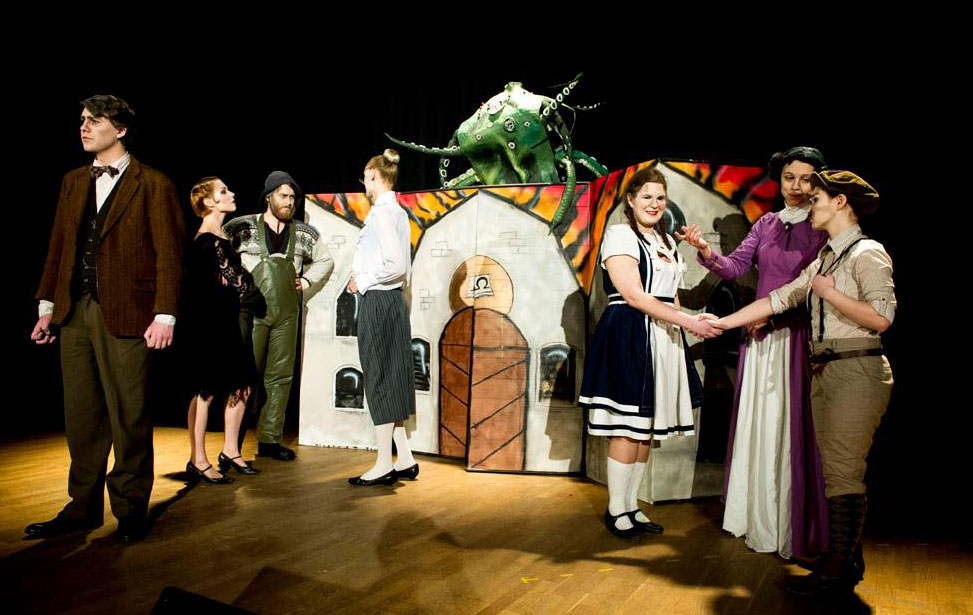 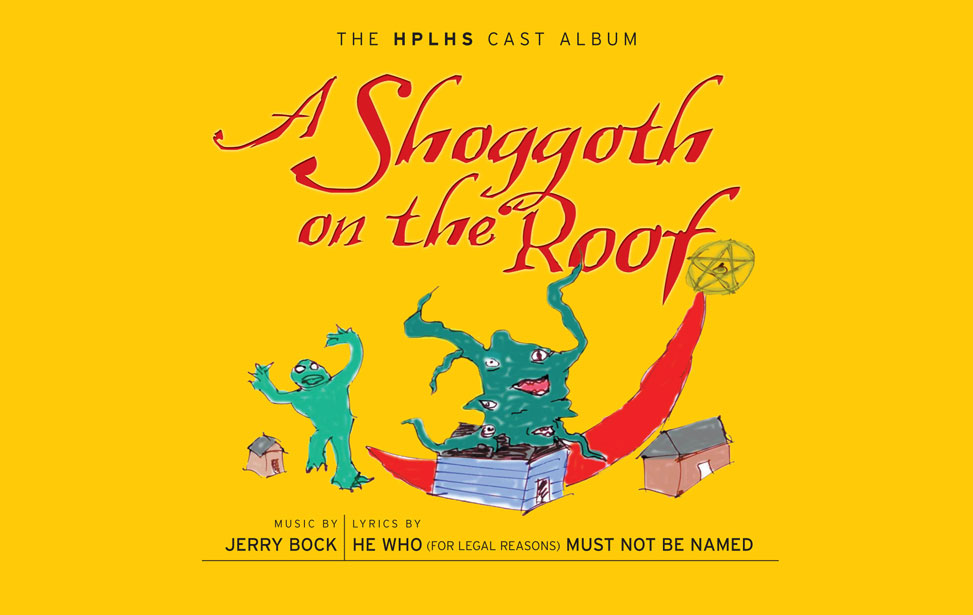 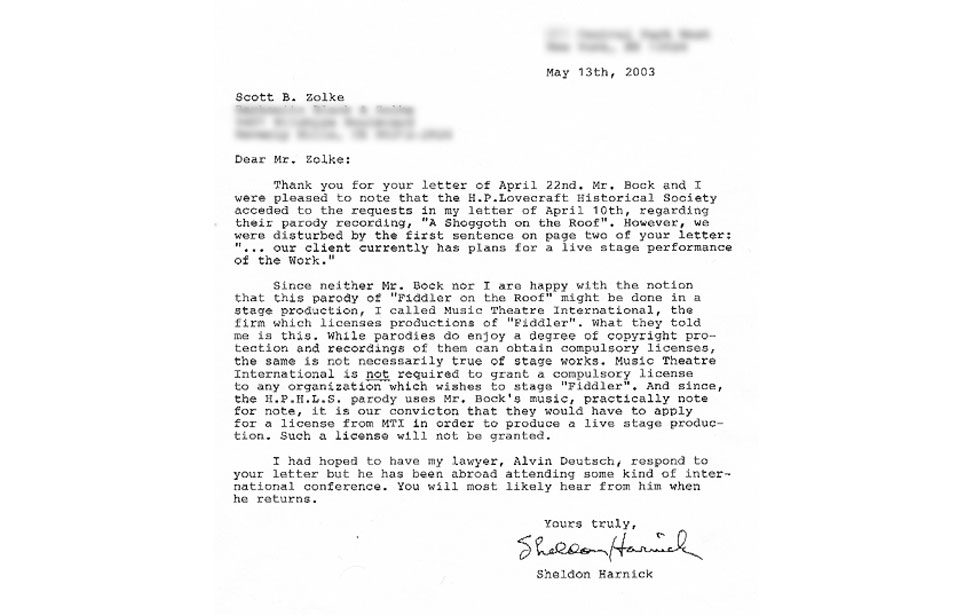 There are some things that man was not meant to adapt to musical theatre, and A Shoggoth on the Roof was long regarded as a musical that cannot and must not be produced. It is a perverse hybrid of the Cthulhu Mythos of 1920s Gothic horror writer H.P. Lovecraft and the plot and music of a beloved classic Broadway show. The original 1979 attempt to stage it ended in mysterious failure: for reasons not entirely known, the production failed to open and the members of the company went their separate ways. Their bold enterprise would likely have vanished into the footnotes of musical theatre history were it not for one fact: an unknown party captured a rehearsal on Super 8 film.

That story is told more fully in the film A Shoggoth on the Roof chronicled here.

The book and lyrics of A Shoggoth on the Roof were written, it seems, some time during the early 1970s by a person whose name we are not permitted to reveal. But after its documentary film about the original doomed production generated worldwide interest and renewed attempts at staging, the HPLHS acquired the rights to refurbish and publish the libretto and produce a cast album.

A beloved Chicago theatrical company, Defiant Theatre, was prepared to take on the cursed show and stage the world premiere in Chicago in October of 2003. A theater space was rented and work had begun on the production. However, under threat of legal action by Jerry Bock and Sheldon Harnick, the composer and lyricist of the beloved classic Fiddler on the Roof which was then being revived on Broadway, Defiant regretfully decided it had to cancel the production. Shoggoth was, once again, silenced. Defiant Theatre disbanded shortly thereafter, its members now scattered far and wide, still producing avant garde stage spectaculars and the occasional television comedy. 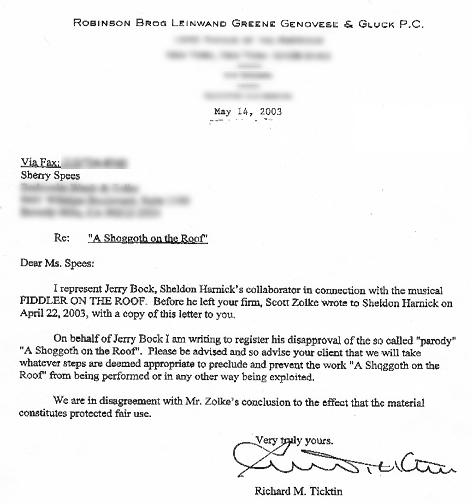 A daring and entirely insane group of talented Swedes calling themselves "Teater Tentakel" later succeeded in staging the unstageable musical in their own excellent Swedish translation, En shoggoth på taket. The show was the highlight of Miskatonicon, a weekend of Lovecraftian goodness in Stockholm in 2005, attended by fans from throughout Europe and across the world. Three robust performances of the show played to packed houses and received lengthy standing ovations.

Led by director/producer/translator Jenny Heldestad, the inventive cast and crew solved some of the show's unsolvable technical problems quite impressively. The gigantic Cthulhu foot which came down and smashed Herbert and Prudence was outstanding, as were the very clever and beautifully sculpted Deep One masks by Anders Muammar. Even some of the simpler effects, like the opening of the Miskatonic Library and the ancient tomb, were very satisfying. The delightful cast of twenty-one players added lots of great little touches to a very strong foundation. Led by the bold performance of Ola Nilsson as Henry Armitage, other standouts included Maria Wikström as Prudence, Magnus Åberg as Herbert West, Elin Jakobsson as Lavinia Whately, and Tobias Wrigstad as Old Man Marsh. Martin Lysén and Niclas Stockenstrand provided excellent comic relief as Carter and Warren, and Malin Toverud was the most adorable ghoul ever seen on stage. 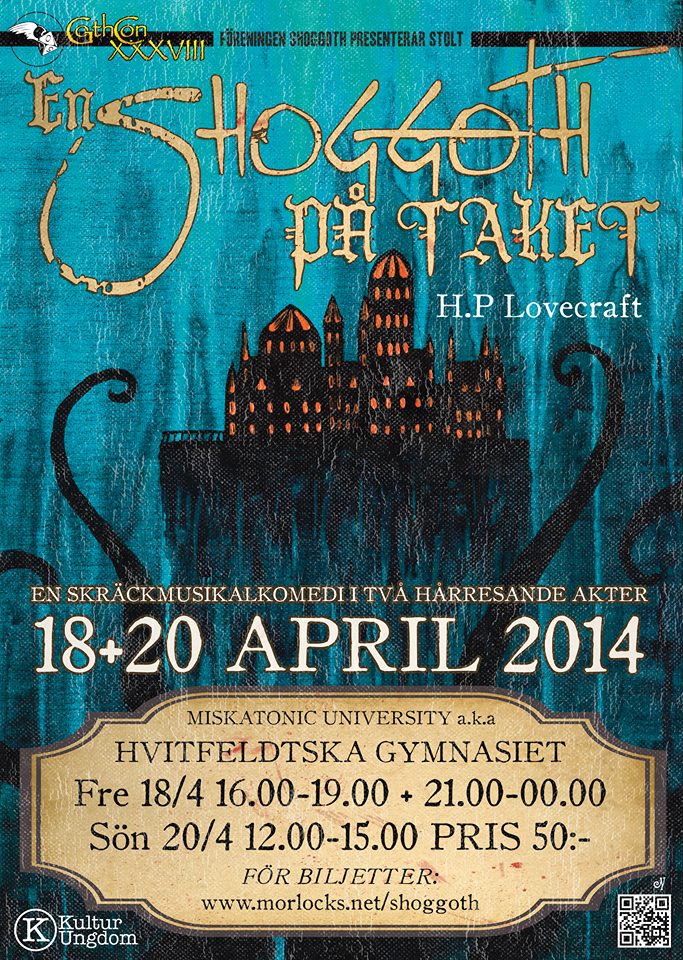 The musical numbers were generally quite well staged, with the excellent accompaniment of the Cthulhu Klezmer band: Qaryn Hallberg (contrabass), Magnus Perlerius (piano), Aron Ambrosiani (trumpet), and Olof Somell (clarinet). The "Shoggoth Prayer" number was both beautiful and deeply disturbing, while the zombie chair-dancing in "To Life" was hilarious. The audience could not help but clap all the way through "If I Were a Deep One," and the final number, "Miskatonic," was actually rather moving. Jenny Heldestad's translation was performed again at GothCon in 2014, directed by Wilhelm Hedin.

The show was staged for the first time in English at the Leprecon gaming convention in Ireland on February 23, 2007. The production was organized by the Trinity College, Dublin Gamers Society. They avoided the legal issues surrounding the Fiddler on the Roof score by using a completely new score written for the musical by Aidan Marsh (no relation, as far as we know...). Sadly no one at the HPLHS was able to attend that production. Although a number of American college theatre groups have sought permission, the show has yet to be produced in the United States. The HPLHS would be only too happy to be in that audience.

When we made the movie there were only pieces of a couple of numbers from the show, and we added "Byakhee Byakhee" in its entirety for use over the closing credits. A surprising number of people saw the movie and wished that the musical was real and complete. Enough of them wrote to ask us to see the whole thing that we realized we should go ahead and finish what He Who (For Legal Reasons) Must Not Be Named had started. Building on the pieces that had been included for the movie, we completed eleven songs and the libretto. Then we created a professionally-produced cast album featuring a small horde of professional singers and crazed thespians. Get it now!

We are very happy to provide below some samples from the cast album for your listening pleasure. While most are just brief tastes, we are happy to provide "If I Were a Deep One" in its sanity-blasting entirety, as performed by the indomitable John Jabaley as Obed Marsh. 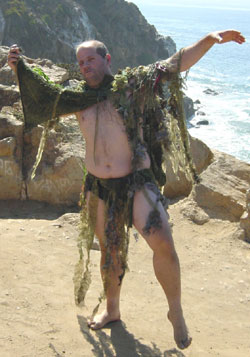 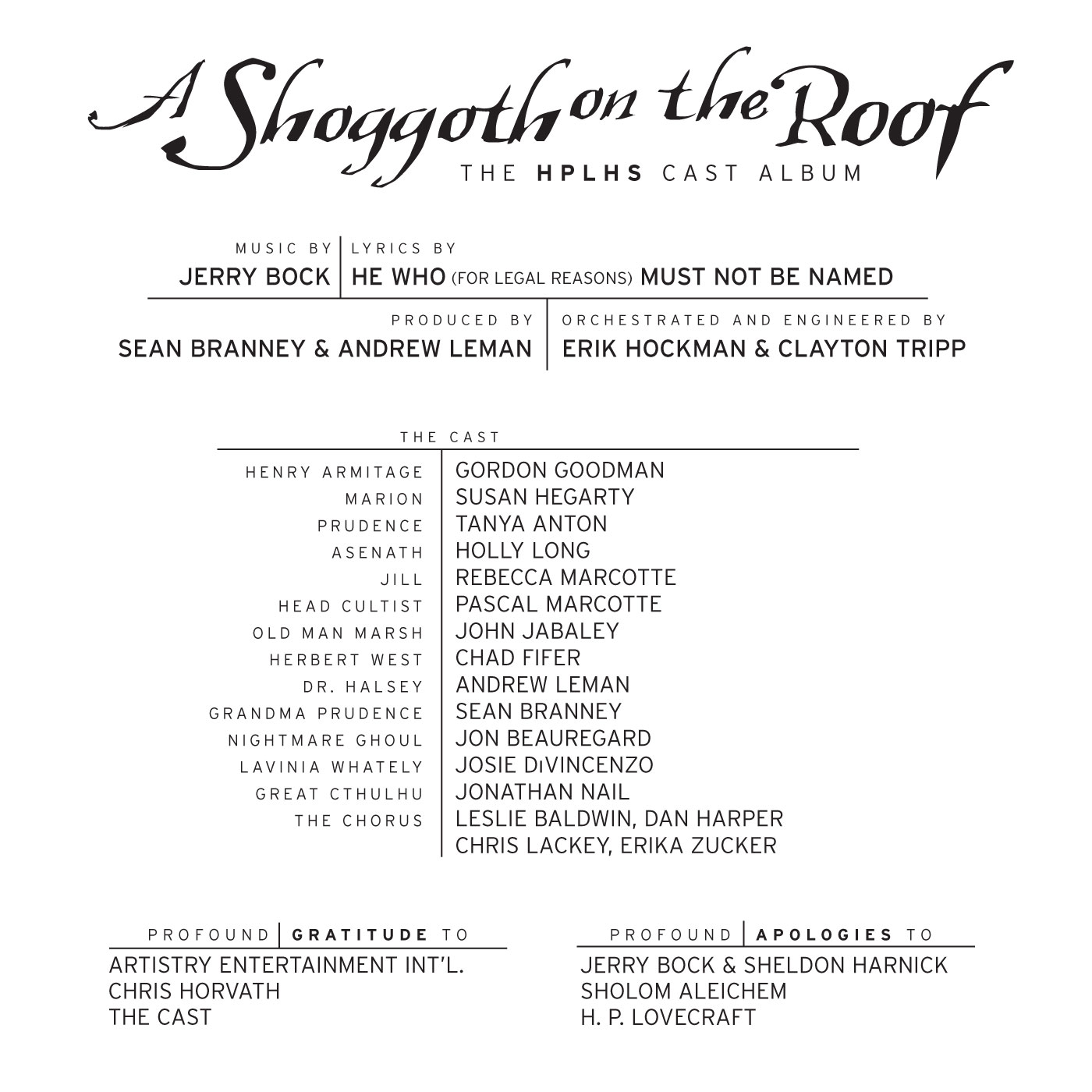 “I had nothing to do with it.” — Stuart Gordon, Hollywood 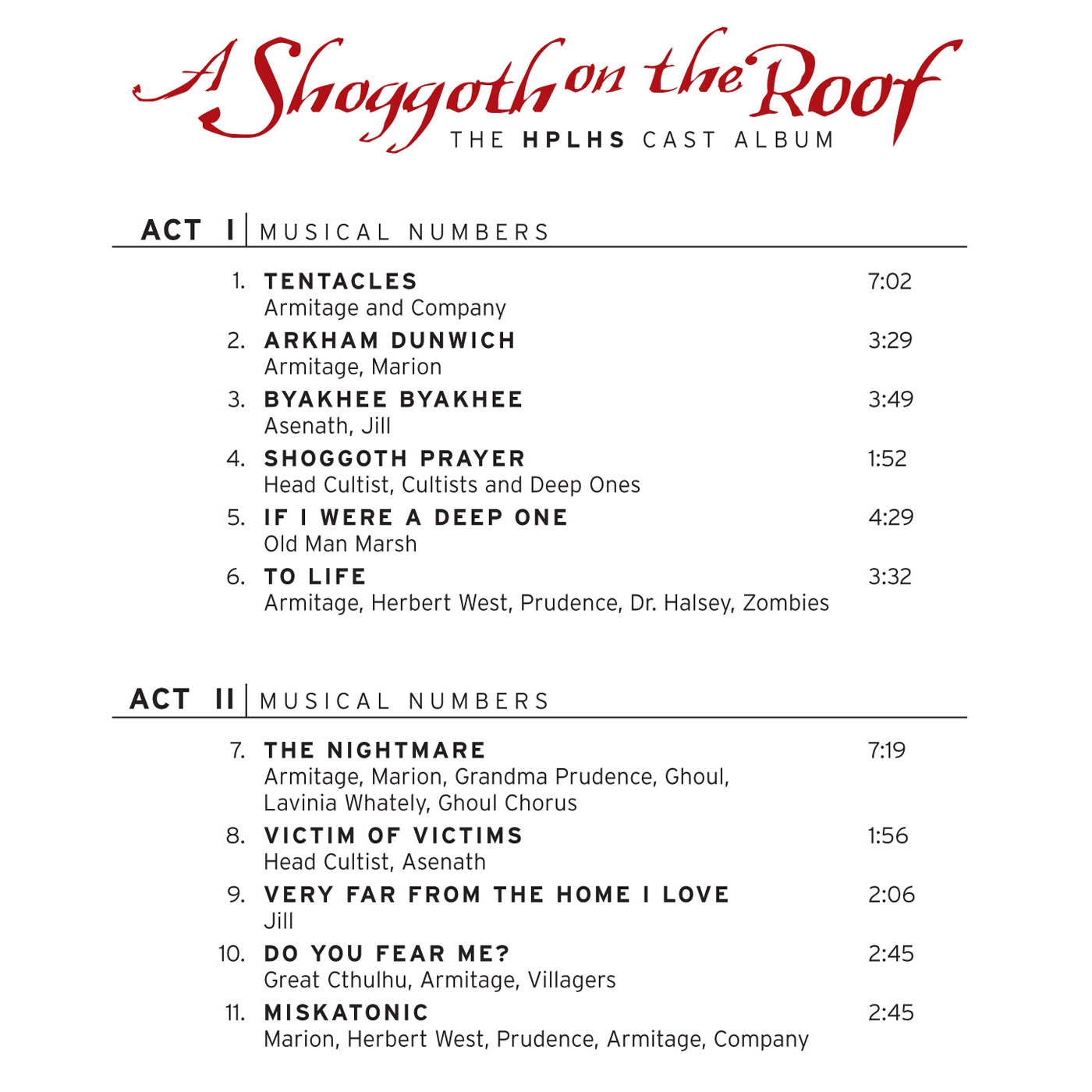 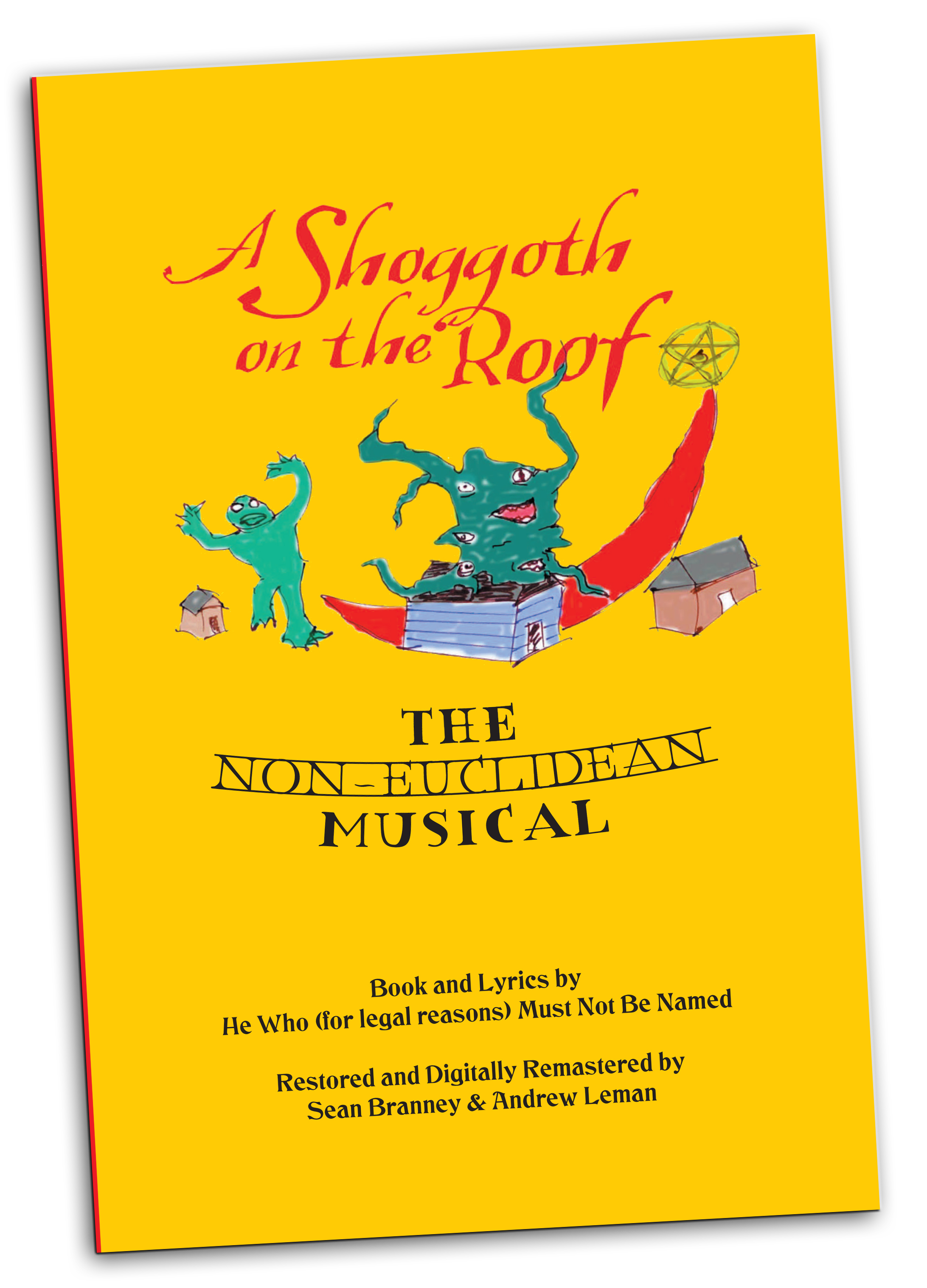 In addition to our cast album, we have prepared the complete libretto of the show. In addition to all the lyrics to all the songs, it contains the text of all the speaking scenes, the stage directions, and some production stills from the movie. Until a live stage production comes to your town, this is the best way to experience the story and all the characters. 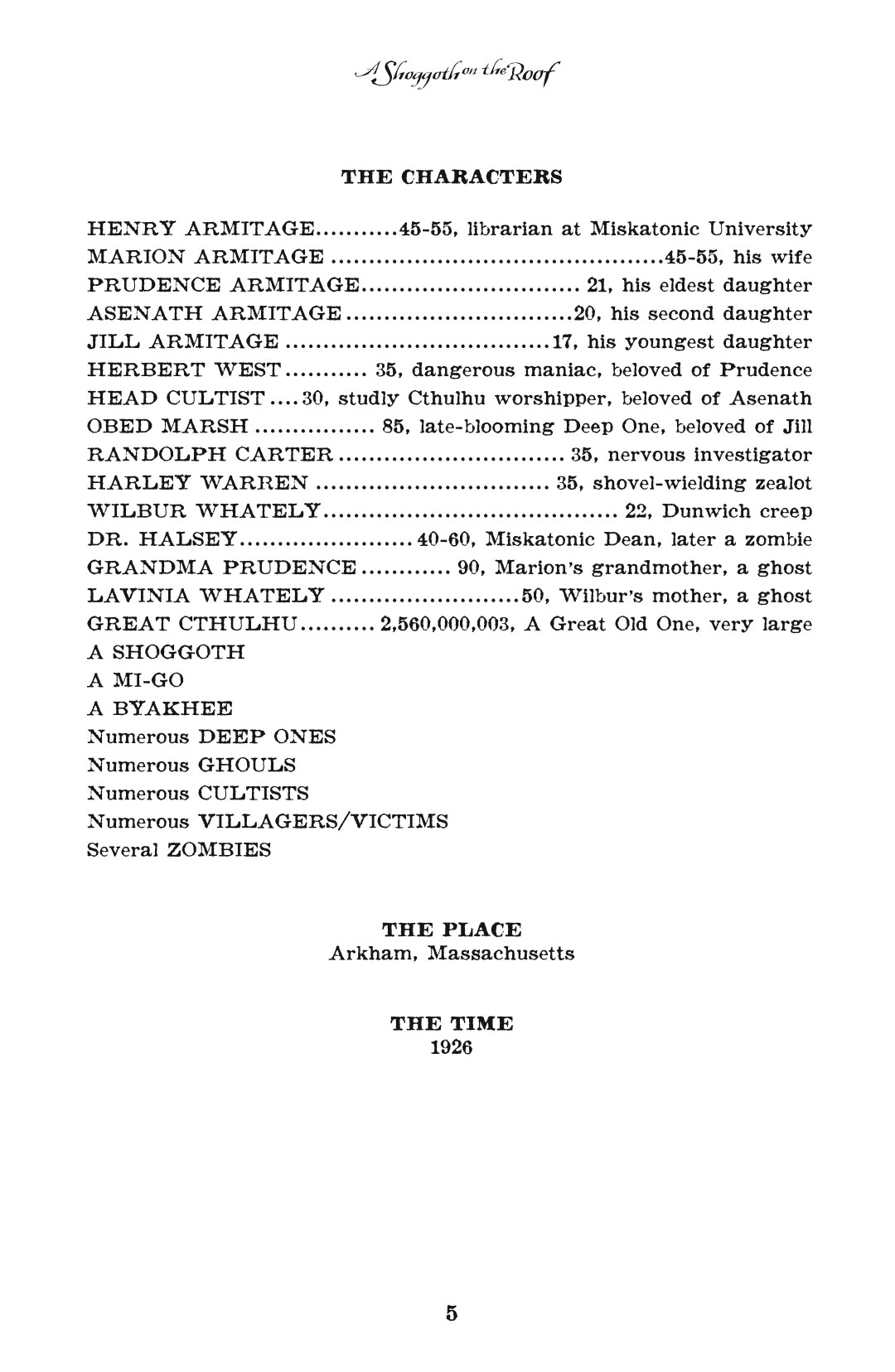