In addition to his classics of horror fiction, it is estimated that Lovecraft wrote 100,000 letters — or roughly 15 every day of his adult life — ranging from one-page diaries to seventy-page diatribes. Perhaps 20,000 of those letters have survived, in the hands of private collectors and at the John Hay Library in Providence.

In each episode of this podcast, we'll read one of these letters (or part of it) and then discuss it. In his letters HPL reveals an amazing breadth of knowledge of philosophy, science, history, literature, art and many other subjects, and forcefully asserts some highly considered opinions (some of which can be upsetting).

And of course his letters offer a fascinating window into his personal life and times. Although we've been working with Lovecraftian material for over 30 years, we still find interesting new things in his letters, and while we don't claim to be experts we look forward to sharing them with a wider audience.

You can subscribe via iTunes, Stitcher, Overcast, Spotify, or wherever you get podcasts! Or listen right here!

My Breakfast with Howard

In which Lovecraft describes both his diet and his thrift as he documents his shopping and dining habits in alarming detail. For added fun he walks the wife of sci-fi writer Fritz Leiber through fascinating (and complicated) branches of his family tree.

Special thanks to Wildside Press for their book Fritz Leiber and H.P. Lovecraft: Writers of the Dark, edited by Ben J.S. Szumskyj and S.T. Joshi. 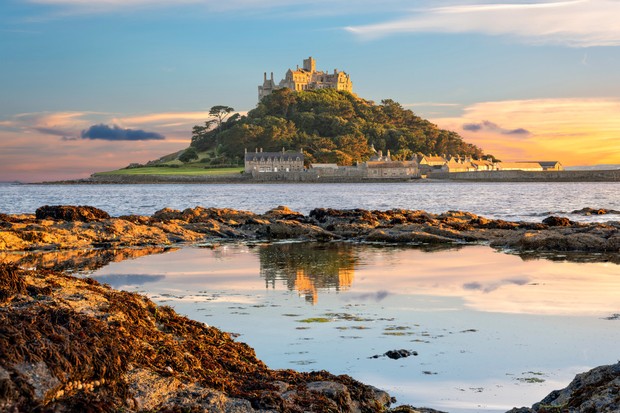 St. Michael's Mount in Cornwall, shown at left, is indeed a location of Dunsanian fantasy, and we look forward to visiting one day.

And here's the ad for the Weybosset Pure Food Market where Lovecraft bought his doughnuts!

Click the link below to see a teapot made by Lovecraft's Irish ancestor, the rogue silversmith and counterfeiter Samuel Casey!

At the suggestion of preëminent Lovecraft scholar S.T. Joshi, we read a letter to James Ferdinand Morton, Junior. Brimming with snappy 1920s slang, HPL's letter grapples with his ideas on writing, creativity and the best ways to get your kicks. Lamp it!

Special thanks to S.T. Joshi and to Hippocampus Press for their book Letters to James F. Morton. 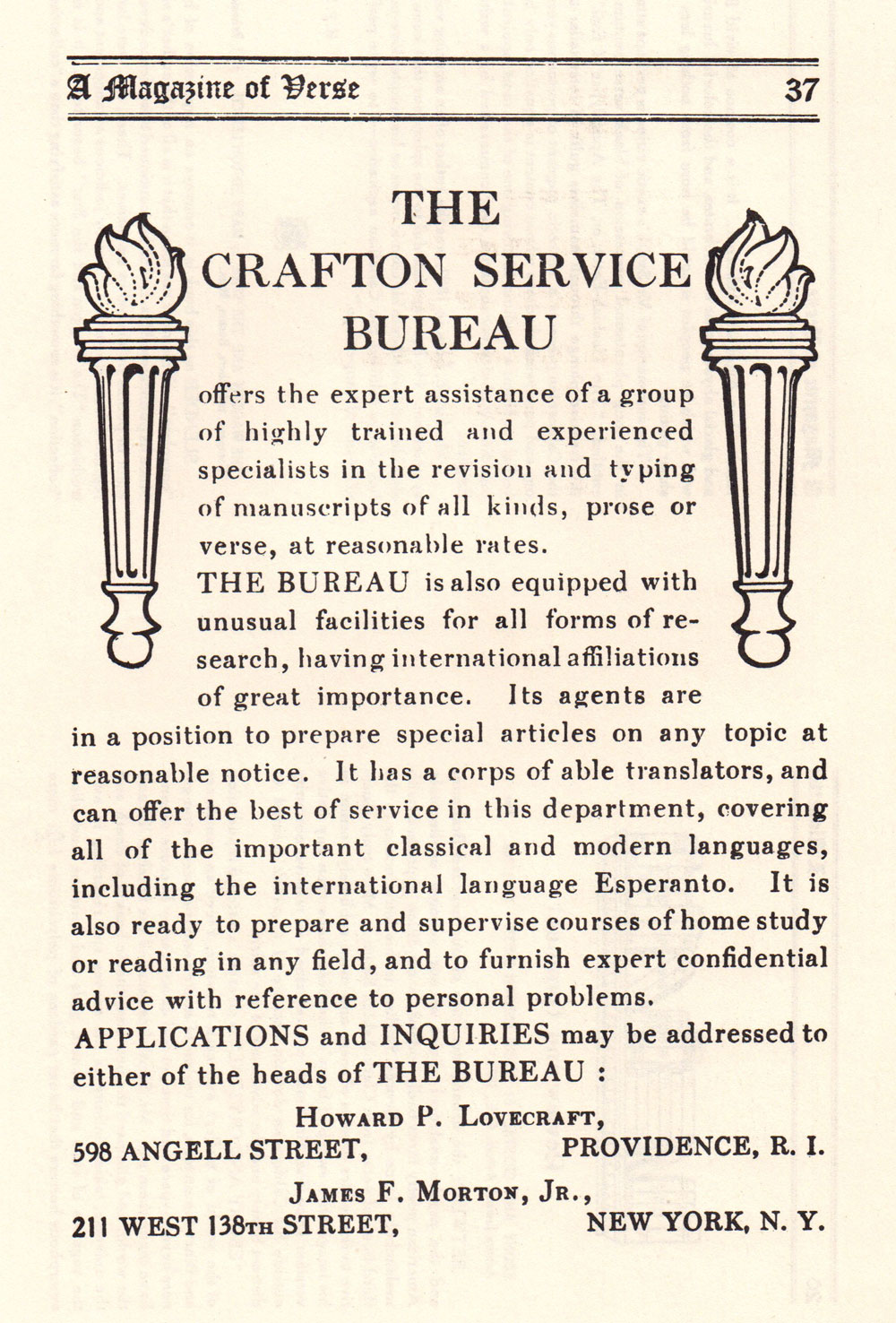 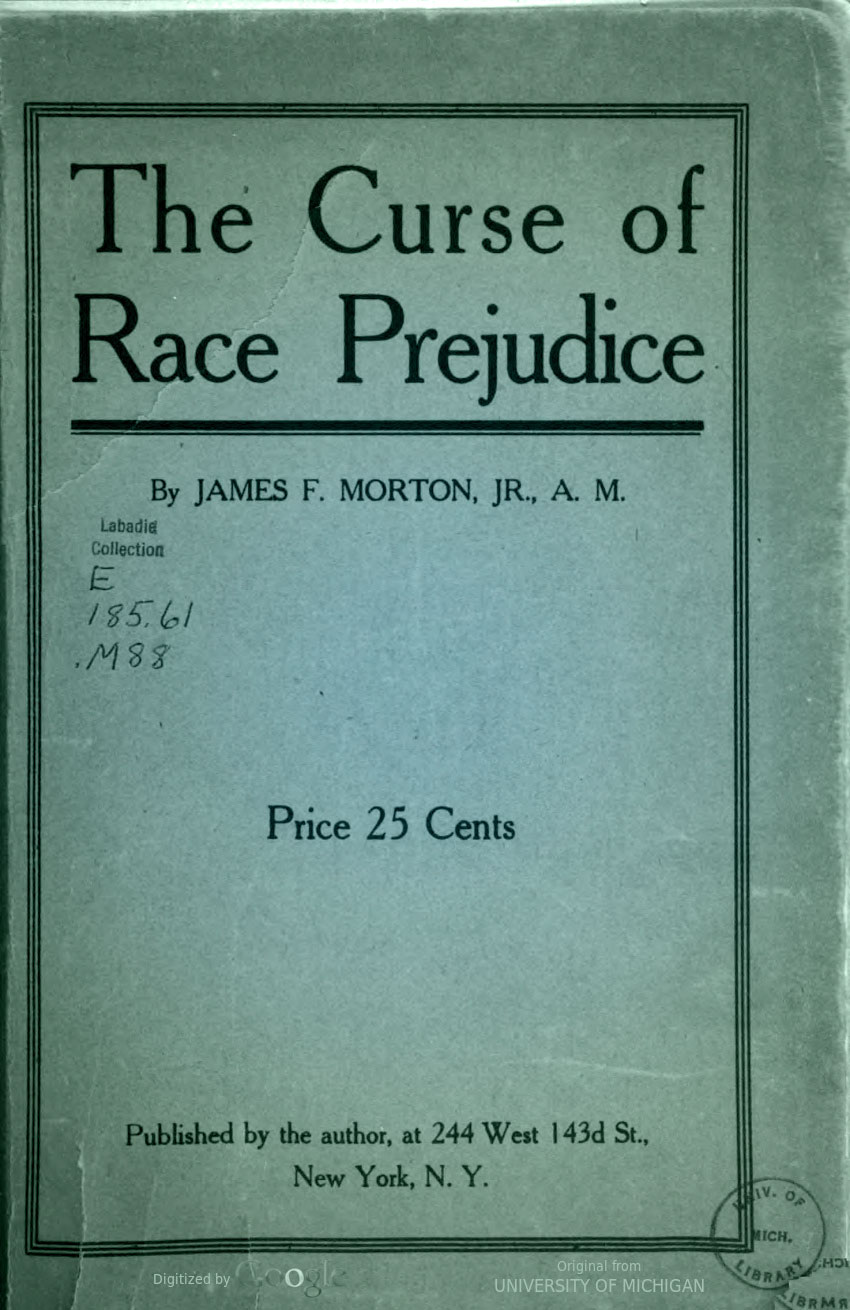 On the left is the ad for Lovecraft and Morton's ambitious joint venture, the Crafton Service Bureau, which appeared in an amateur journal called L'Alouette in September of 1924. On the right is the cover of Morton's book from 1906, "The Curse of Race Prejudice". You can read it online by clicking here.

Lovecraft mentions "Harry Emerson Fosdickism" in this letter. Fosdick was a liberal Protestant minister at the center of the Fundamentalist/Modernist controversy in the 1920s.

He also mentions the "Chiltern Hundreds". Although we don't have the article from the Christian Science Monitor that HPL sent to Morton, it might have explained how British politicians used the Chiltern Hundreds as a backdoor way of resigning from Parliament.

Politics, Poetry and Other Outrages

Howard unfurls his most vigorous inner-cynic as he attacks political ideals and modern poetry in this letter to Washington DC poet Elizabeth Toldridge.

There are lots of poems by Toldridge in the Brown Digital Repository Lovecraft Collection. To see one she wrote about HPL, click here.

Be sure to check out Fred Lubnow's Lovecraftian Science blog!

Tidings of Comfort and Joy? (Part 2)

Just before Christmas in 1925, Lovecraft meets Vrest Orton for the first time. Howard is smitten by his young visitor. Is it a blossoming bromance or something more? Don't miss the giddy side of HPL in part two of his Christmas letter to his Aunt Lillian.

You can see this letter for yourself at the Brown Digital Repository. We thank them profoundly for making this and so much other material available online. Music by Troy Sterling Nies.

This was the magazine for book collectors co-founded by Vrest Orton. It was published from 1930 to 1950.

In 1946 Vrest and his wife Mildred co-founded the Vermont Country Store, which is still going strong and still run by the Orton family.

Tidings of Comfort and Joy? (Part 1)

HPL sends his aunt Lillian Clark a very telling Christmas letter. Written while he was living in Brooklyn, the letter is revealing about both HPL and those closest to him. Wishing you and yours a very merry Christmastime and a very Scary Solstice!

You can see this letter for yourself, including all the Christmas verses we left out, at the Brown Digital Repository. We thank them profoundly for making this and so much other material available online. Music by Troy Sterling Nies. 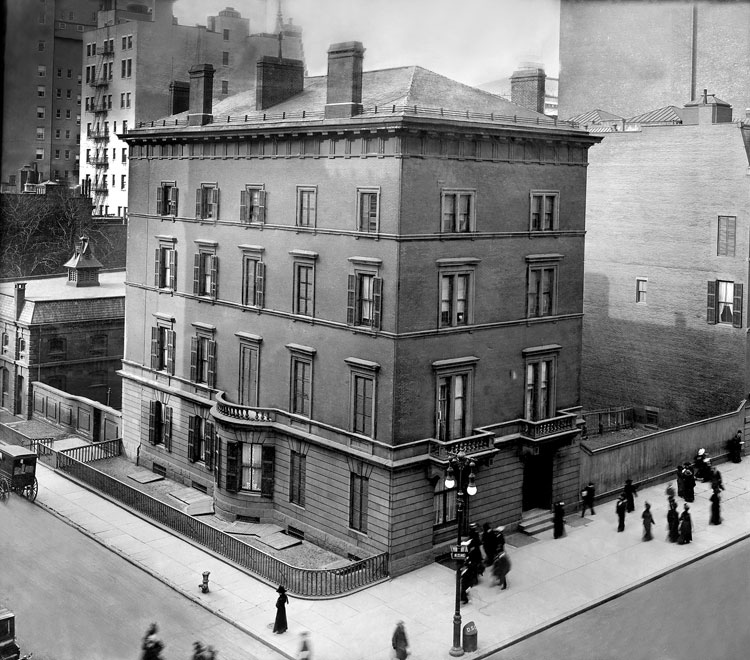 This was the Fifth Avenue mansion of the crazy rich Wendel siblings circa 1905. The site is now the location of a huge office/retail building. You might have to have an NYT subscription to see it, but check out this great New York Times article about the Wendels.

And while you're surfing, learn more about the fascinating Byron Khun de Prorok!

Lovecraft hoped to get a job at the Paterson Museum, where his friend James F. Morton was a curator and which was founded in the very year HPL wrote this letter. HPL never got that job, but the museum did eventually get its own new building. It's still going and is worth a visit! Check it out here.

Lovecraft mentioned a number of interesting figures in the letter we didn't have time to talk about in the episode. One was Edward Arnold, whose recent obituary HPL and his aunts had noted. Lovecraft said it was too bad his mother didn't "snap him up". He was a member of one of the founding families of Rhode Island (which also included the infamous Benedict Arnold). HPL mentions astronomical articles by "Brainin" and "Upton". C.S. Brainin was the editor of The Amateur Astronomer in the late 1920s, and Professor Winslow Upton was the director of Ladd Observatory in Providence when HPL was a boy and wrote articles for the Providence Journal. He also mentions enjoying the "Hoppin conceptions", which is a reference to noted 19th-century Providentian book illustrator Augustus Hoppin.

High school admirers Robert Bloch and Willis Conover both wrote fan letters to Lovecraft. Here we see HPL writing back to these two young writers who will go on to correspond with HPL and have fascinating lives after Lovecraft's death.

Thanks to Hippocampus Press and to Carrollton-Clark Publishing. Music by Troy Sterling Nies.

Here's a little sample of the voice of Willis Conover.

Grief and Other Lugubrious Demonstrations

In which Lovecraft delivers some unexpected bad news. Intellect collides with emotion in this letter to poet Ann Tillery Renshaw.

Thanks to Hippocampus Press for their book H.P. Lovecraft: Letters to Elizabeth Toldridge and Anne Tillery Renshaw. Music by Troy Sterling Nies.

In which HPL deploys shocking language in a feisty letter to his friend, Wisconsin schoolteacher Maurice Moe.

Thanks to Arkham House. You can read a much less abridged version of this letter in the book H.P. Lovecraft: Letters to Maurice W. Moe and Others from Hippocampus Press. Music by Troy Sterling Nies.

Pictured at left is the cover of the Walter B. Pitkin book which is apparently still available on eBay to anyone with $1250.00. But eagle-eyed listener Ryan Mullahy pointed out that you can save your money and read it online at the Internet Archive! Although we didn't manage to score it in hardback, the HPLHS library does contain a vintage copy of the handbook from the Newspaper Institute of America, which HPL also mentions in this letter. One of their ads is pictured on the right. You can learn a bit more about John Ronane here. In addition to Maurice Moe and Harry Houdini, a couple of other notable people from Appleton, Wisconsin were HPL's friend Alfred Galpin and acclaimed actor Willem Dafoe!

In which Lovecraft writes his friend and fellow author of fantastic tales, Clark Ashton Smith. As wildfire threatens Smith's California home we're reminded how nothing ever really changes.... The LA Times has a good interactive map of California fires and you can see the current status of things here.

Special thanks to Clark Ashton Smith guru Scott Connors, and to Hippocampus Press.

We are thankful also to all who have been listening, and wish you all a wonderful Thanksgiving.

In which HPL writes to his mother about his delightful visit to a gathering of amateur press friends for St. Patrick's Day, 1921. Sent a few weeks before her death, it's Howard's final extant letter to his mother.

Special thanks to our friends at the Brown University Digital Repository where they keep and digitally share with the public many of HPL's original manuscripts. You can see a thrilling ad for David Van Bush with Lovecraft's commentary here.

If you want to read some of Bush's books, you can find the one Lovecraft himself worked on here. And click here to read Practical Psychology and Sex Life.

Dipping Our Toes in August Derleth

In which we read a letter from HPL to August Derleth from November 7, 1926. We discuss unique qualities of HPL's correspondence with Derleth, and his essential role in sharing Lovecraft's works with the public.

Our sincere thanks to the helpful team at Hippocampus Press.

A set of three shorter letters written one hundred years ago, in which 29-year-old HPL dispenses relationship and life advice to one of his earliest correspondents, Rheinhart Kleiner.

Special thanks to Arkham House. The text of the letters came from their book Selected Letters of H.P. Lovecraft, Volume I.

In his first letter to Robert H. Barlow, written on June 25, 1931, HPL very kindly answers a few important questions of a young fan, and begins what will prove to be a very important relationship.

Special thanks to S.T. Joshi and David E. Schultz. The text of the letter came from their book O Fortunate Floridian, published by the University of Tampa Press.

Music by Troy Sterling Nies. Our thanks to Dan Viafore for his audio expertise. Thanks also to Chris Lackey and Chad Fifer of The H.P. Lovecraft Literary Podcast for their encouragement and suggestions.