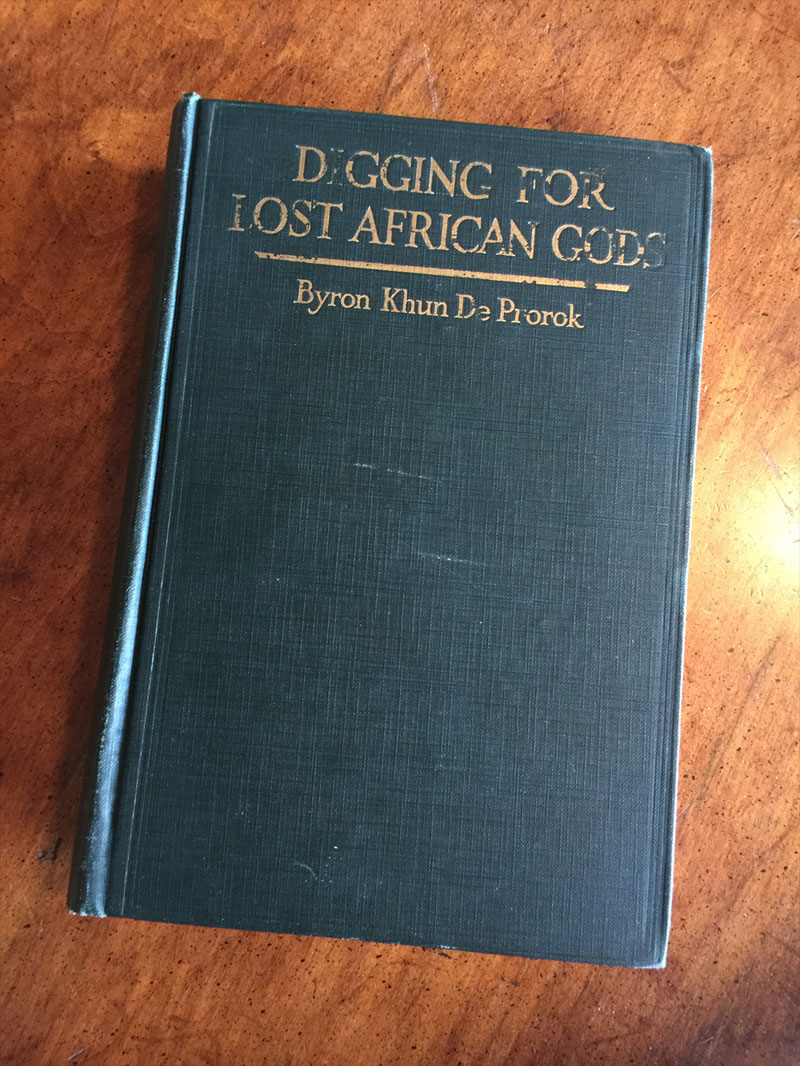 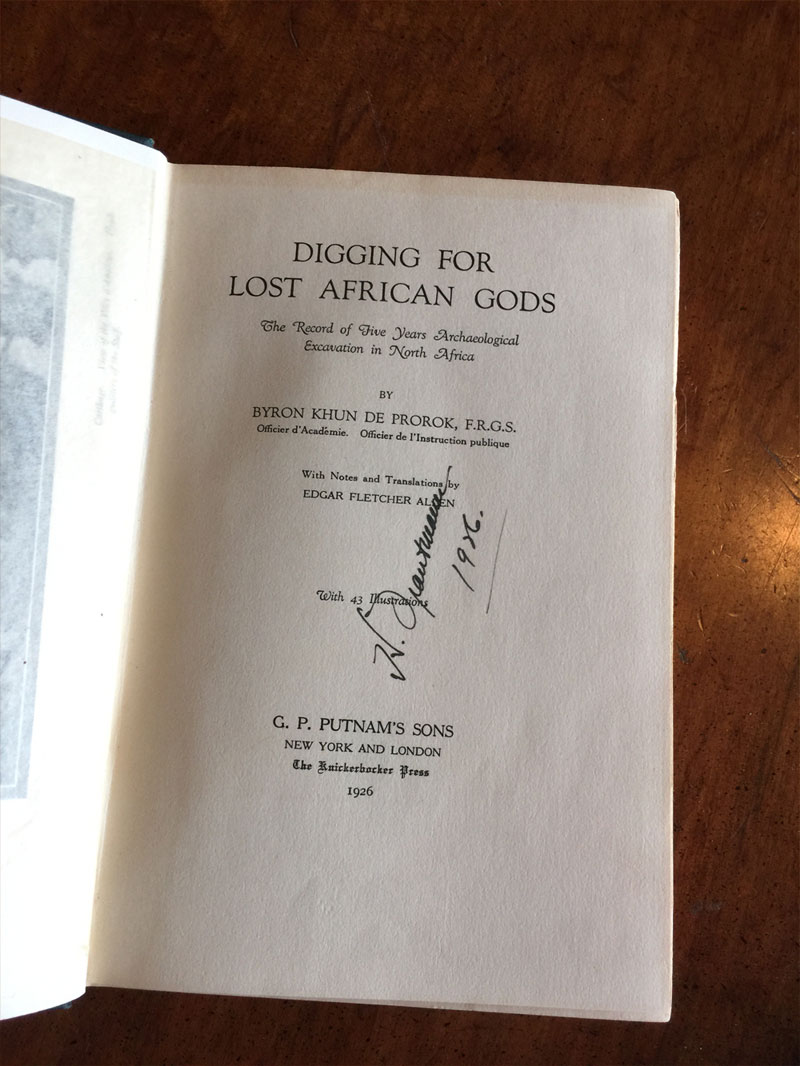 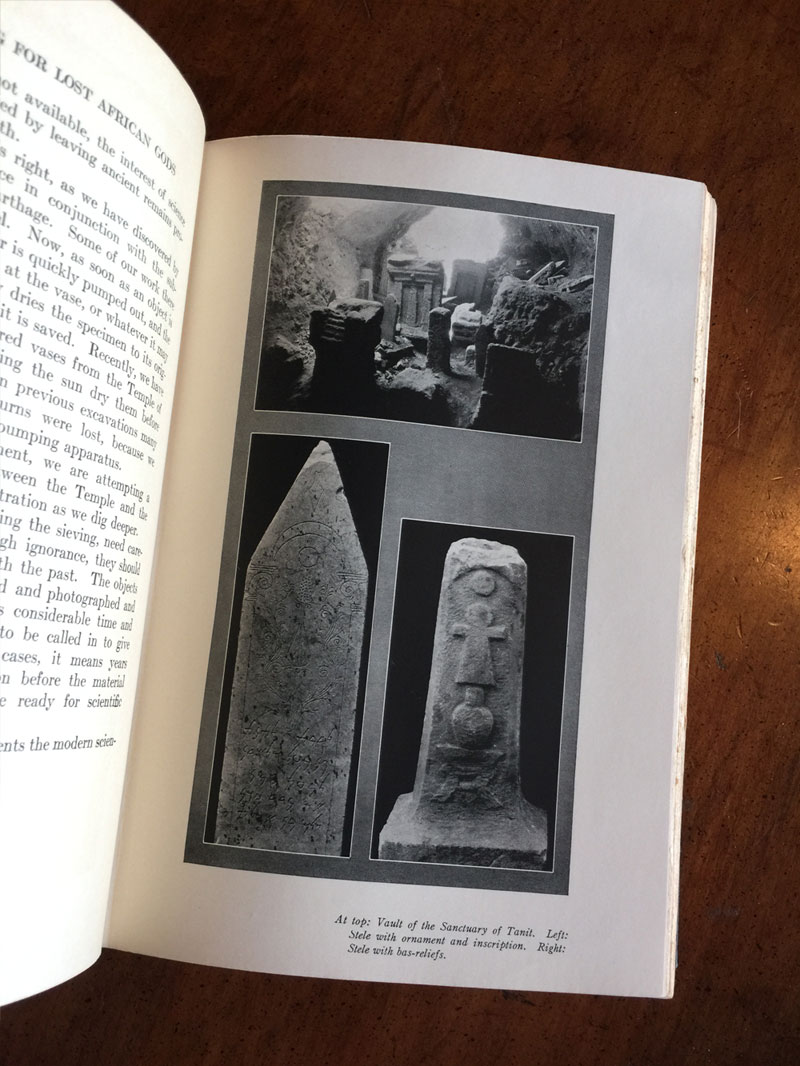 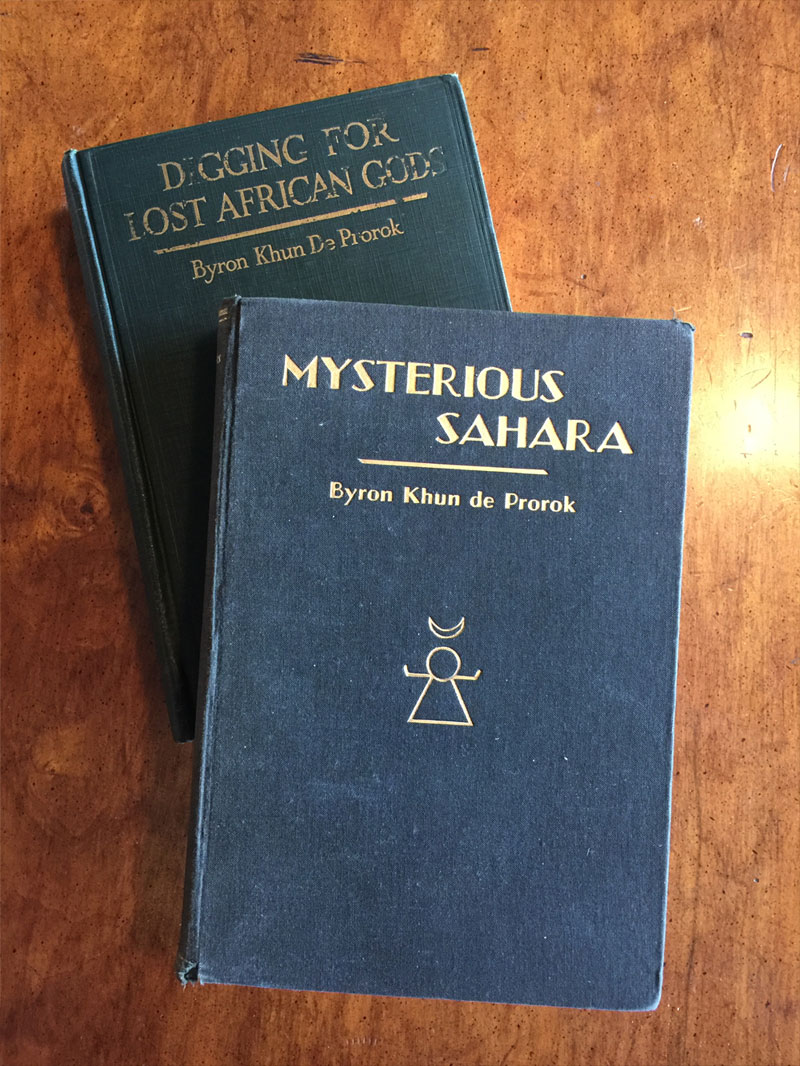 We now have two Prorok first editions on our shelves! 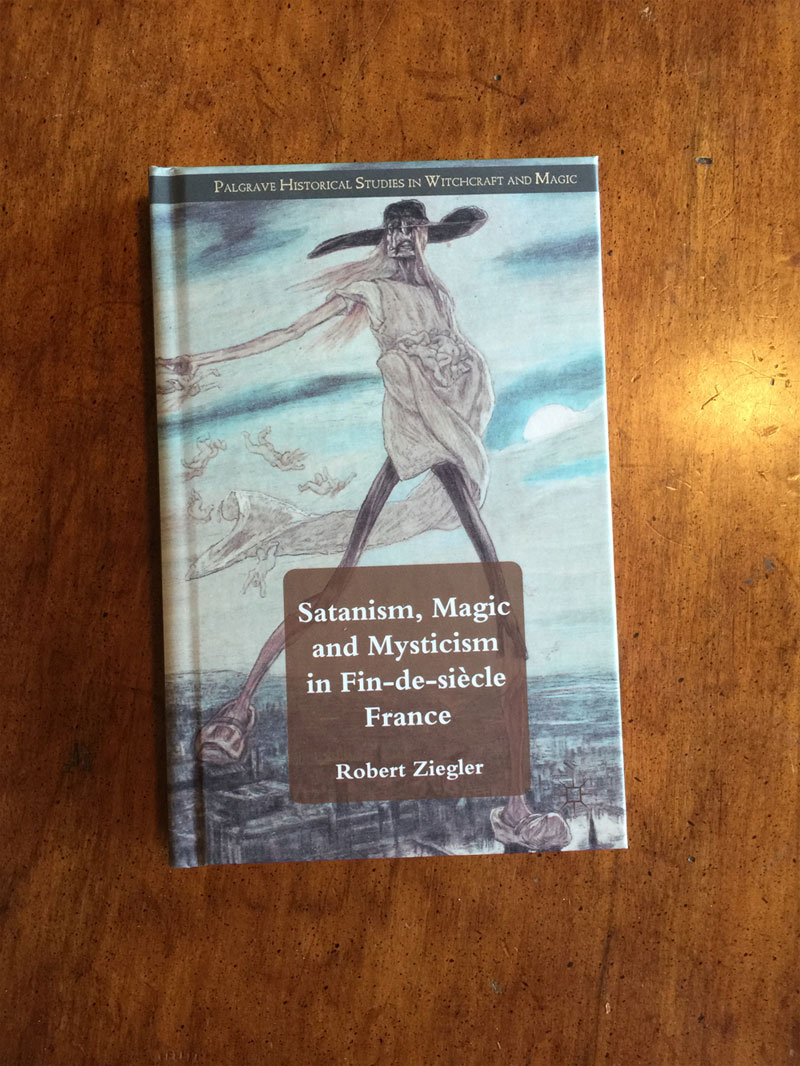 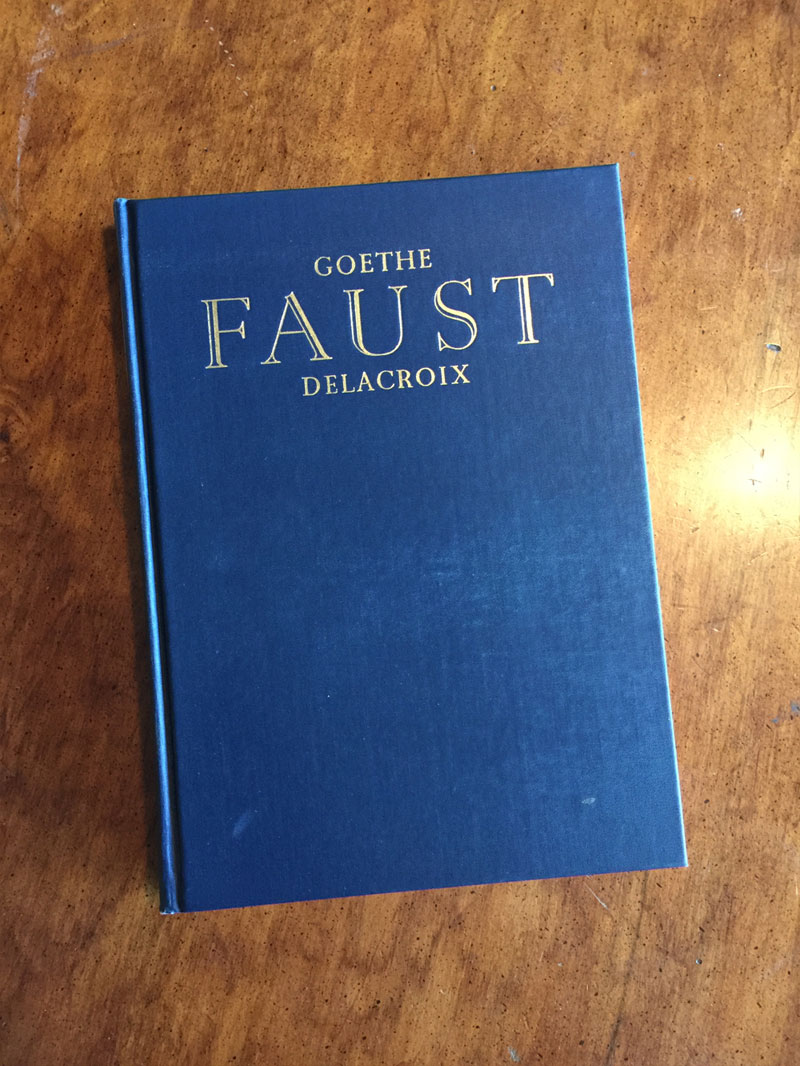 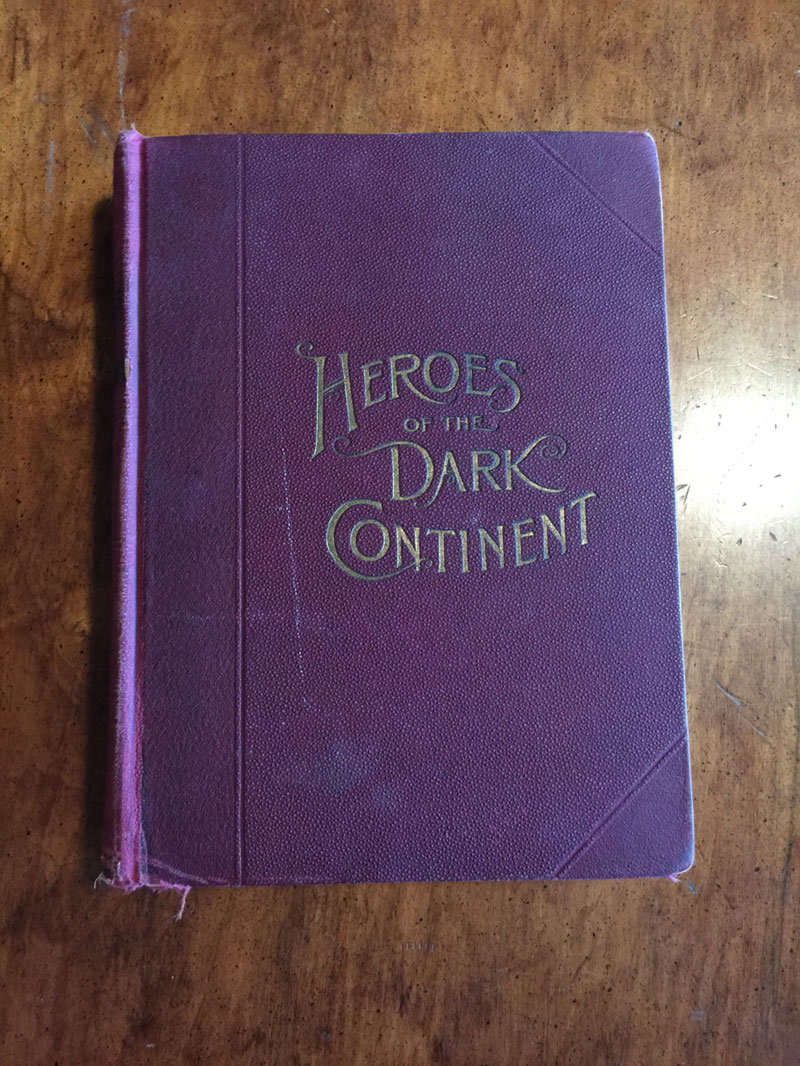 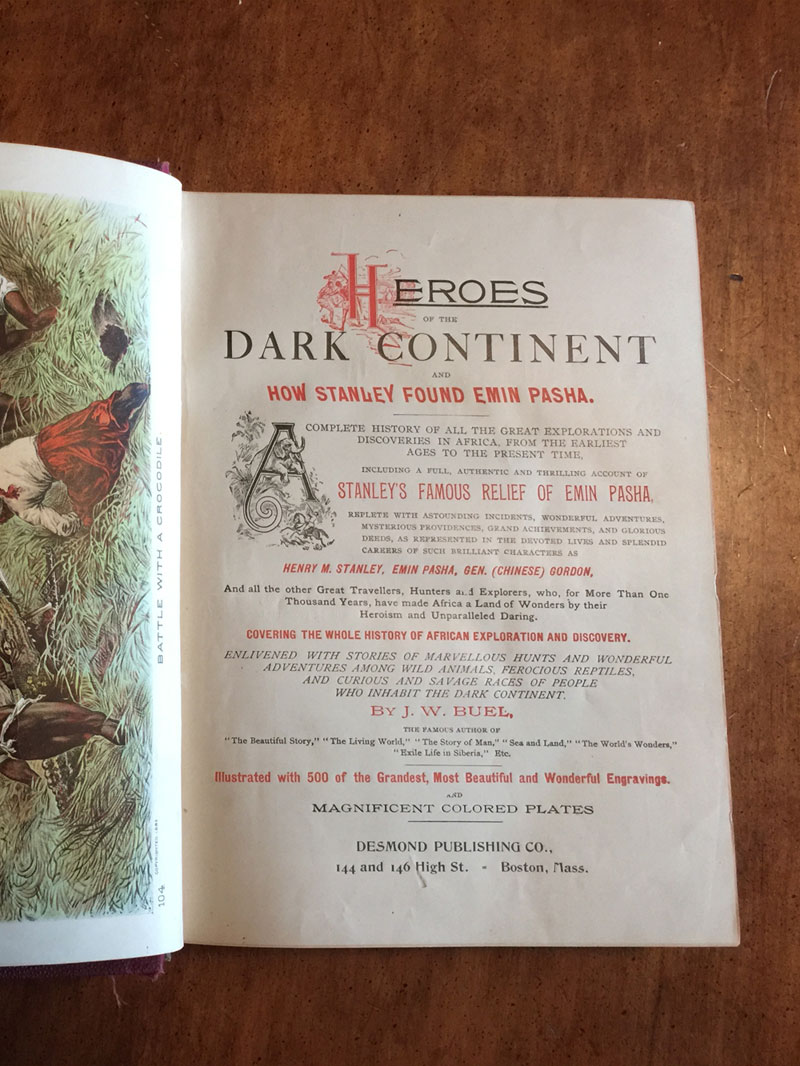 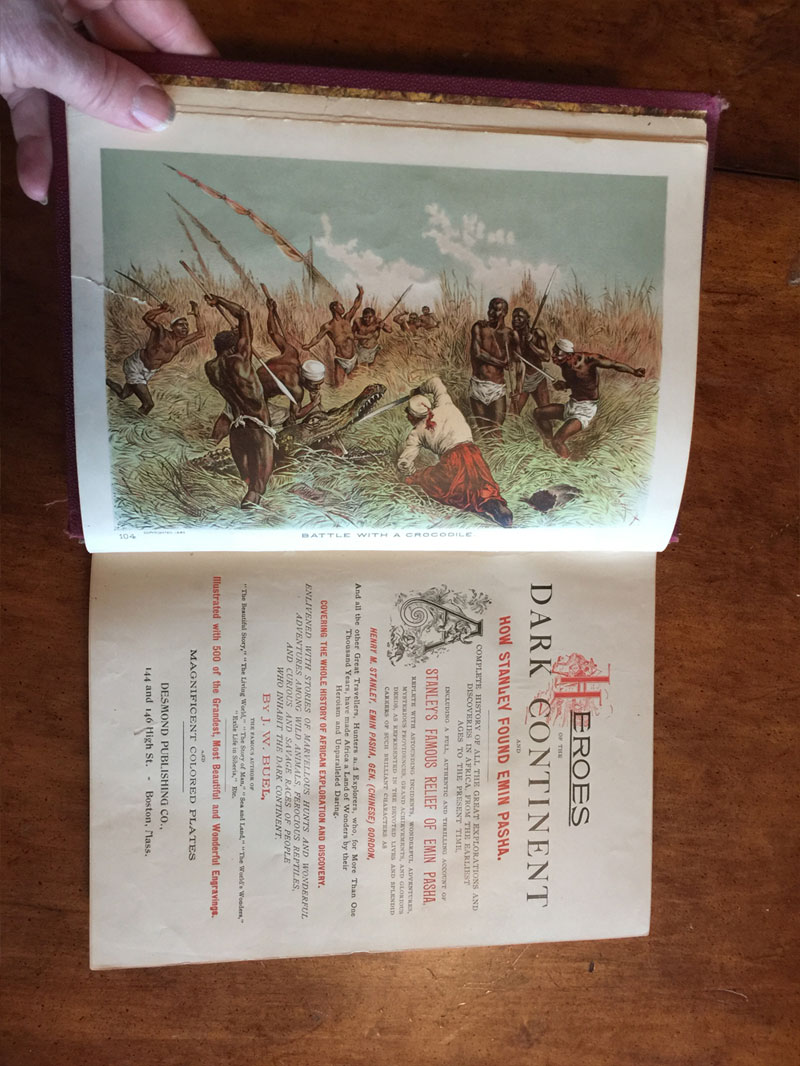 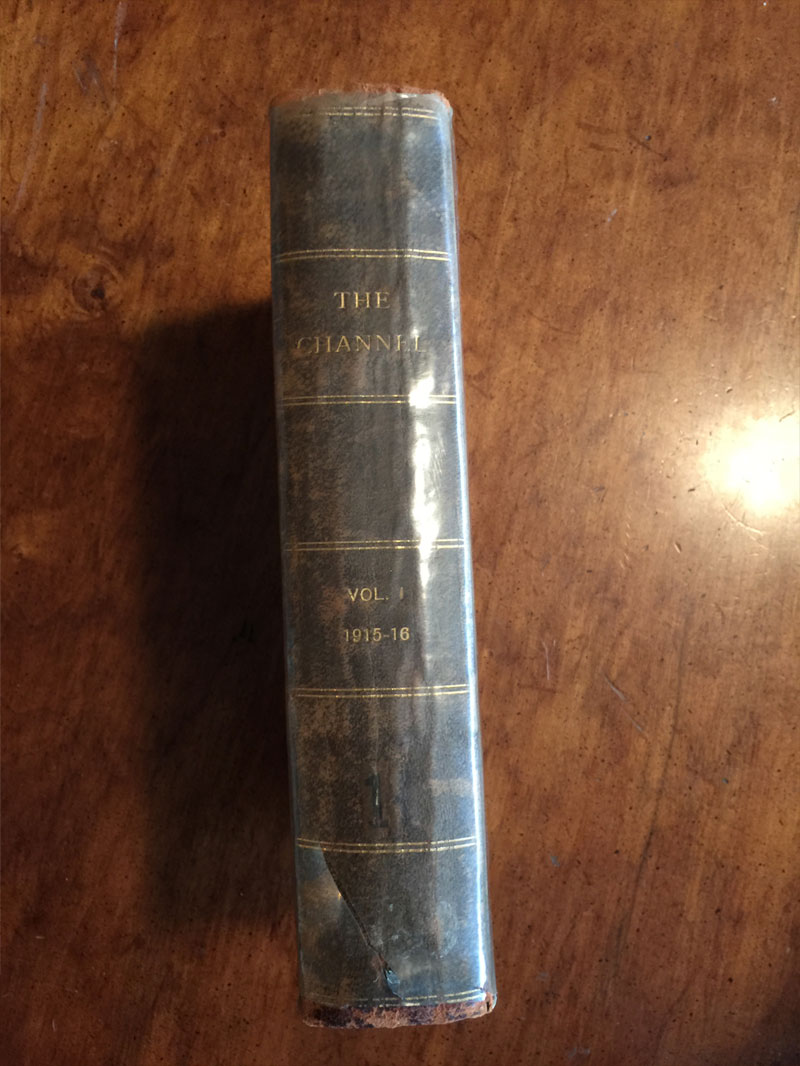 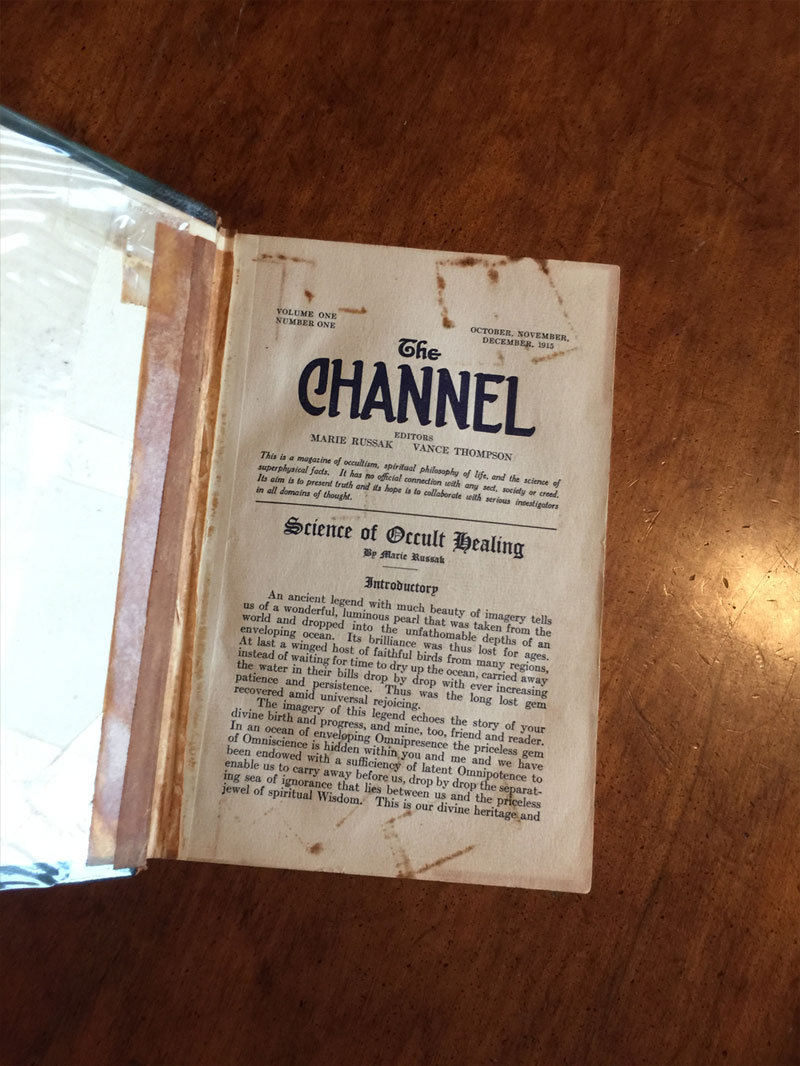 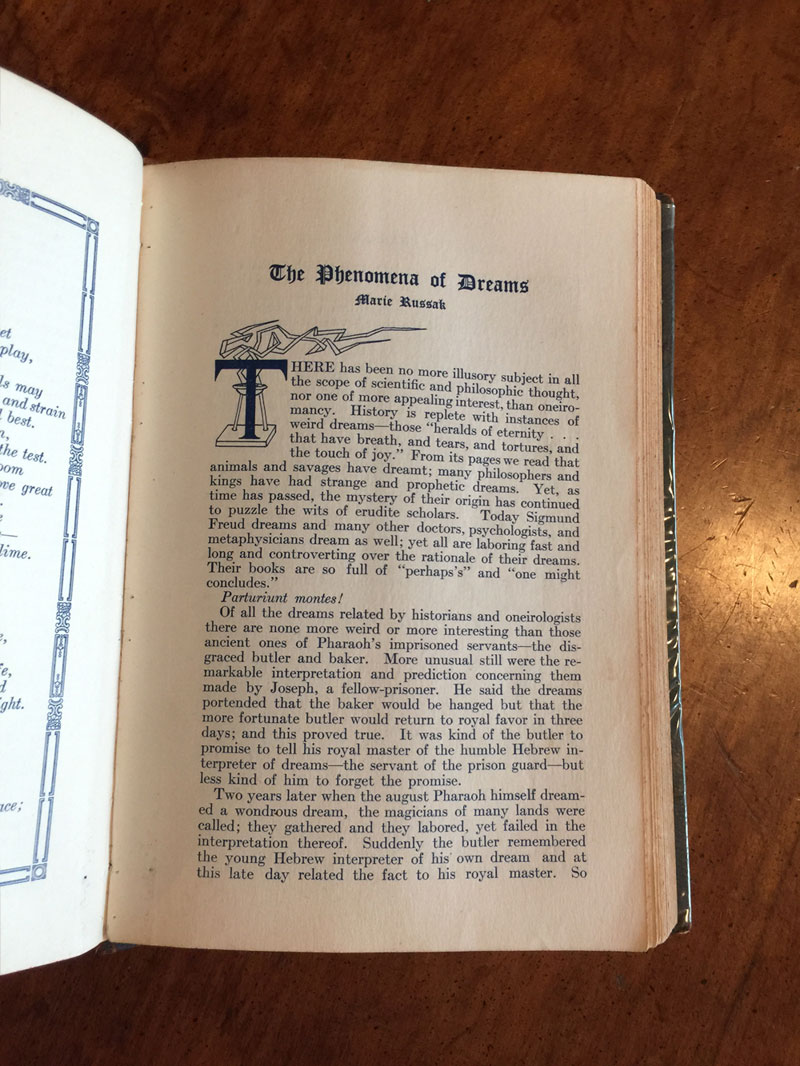 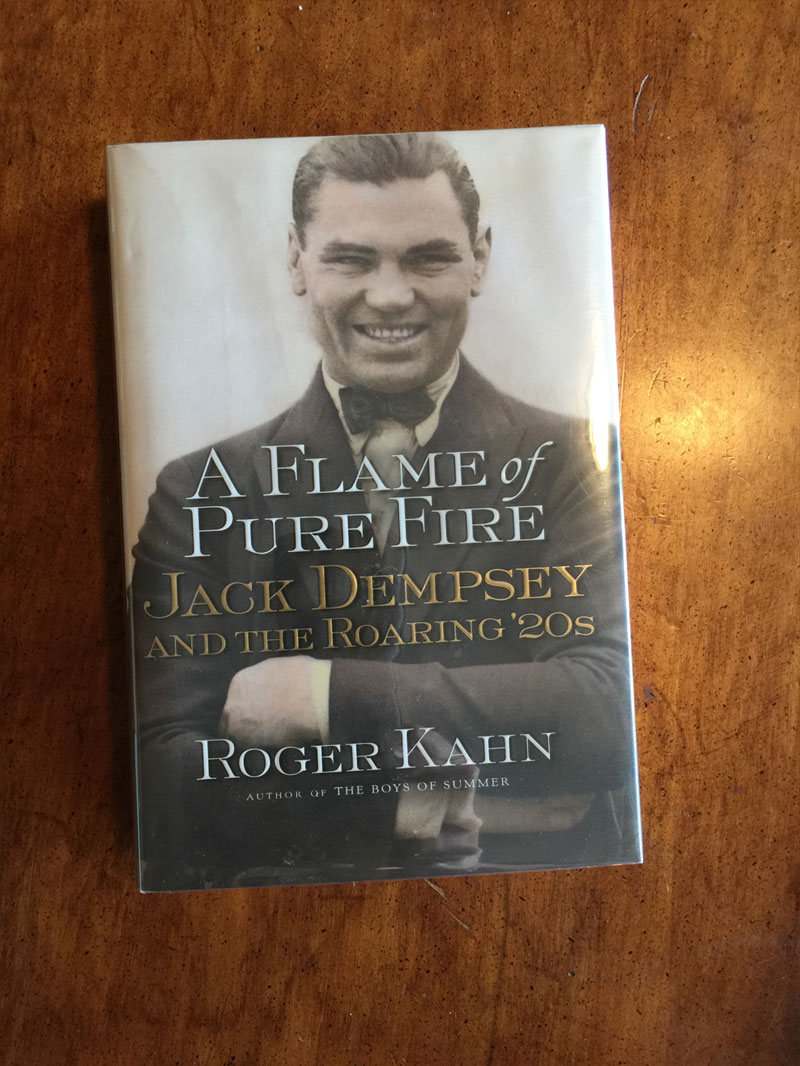 Acquired at a Pasadena antique store

The abundantly packed shelves of the society library groaned under the weight of several new acquisitions this holiday season!

Inspired by a recent episode of Voluminous in which shady 1920s archeologist Byron Khun de Prorok was mentioned, member Allison Rich of Providence, R.I. sent a first edition of his first book, Digging for Lost African Gods (1926). It's in wonderful shape and features some amazing photographs. It joins a first edition of Prorok's second book (1929) that we recently found on eBay.

Member Christopher Kalley of Bedford, Texas sent a copy of Satanism, Magic and Mysticism in Fin-de-siecle France (2012) to bolster our modern scholarship section.

Member Chris Huning of San Leandro, California sent a bound set of Volume 1 of the metaphysical magazine The Channel. When we were making props many years ago for our motion picture of The Call of Cthulhu we used an article from this magazine as part of Professor Angell's files, and it was a treat to see it again in bound form!

And in another acquisition inspired by an upcoming episode of Voluminous, we recently stumbled on an interesting book (1999) about famed boxer Jack Dempsey and his place in the 1920s.

Our deepest thanks to the members who generously donate to the society's carefully curated library! 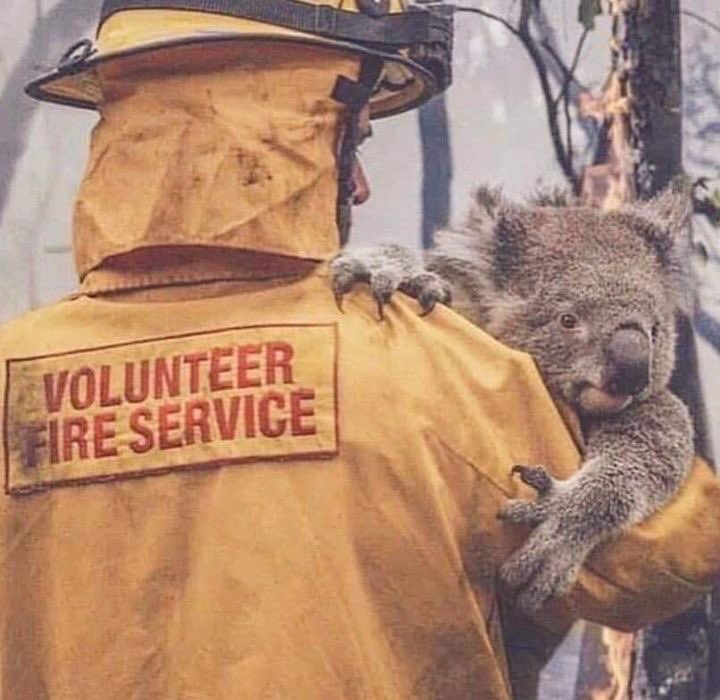 Our friends at Chaosium are making the RuneQuest Glorantha Bestiary 'Pay-What-You-Want' on DriveThruRPG for the next seven days (regular price is USD$19.99). If you download it, instead of paying them, they encourage you to make a donation to the Australian fire-fighting and recovery effort.

As our friends say, Gloranthan beasts are special; but Australian animals are unique and precious - and real. It is estimated up to half a billion of them have perished so far in the devasting wildfires still raging across the continent. That number is expected to rise dramatically, as vast swathes of habitat have been consumed by flame.

Some places where you can donate:

WIRES is a wildlife rescue nonprofit rescuing and caring for thousands of sick, injured and orphaned Australian native animals. World Wildlife Fund Australia is directing its efforts towards koala conservation. Thousands have perished so far. The Port Macquarie Koala Hospital is raising funds to distribute automatic drinking stations in the burnt areas to help in koala and wildlife survival, and sharing the funds with other wildlife organisations in the fire affected regions. Other places to support: Australian Red Cross, New South Wales Rural Fire Service, Country Fire Authority Victoria. 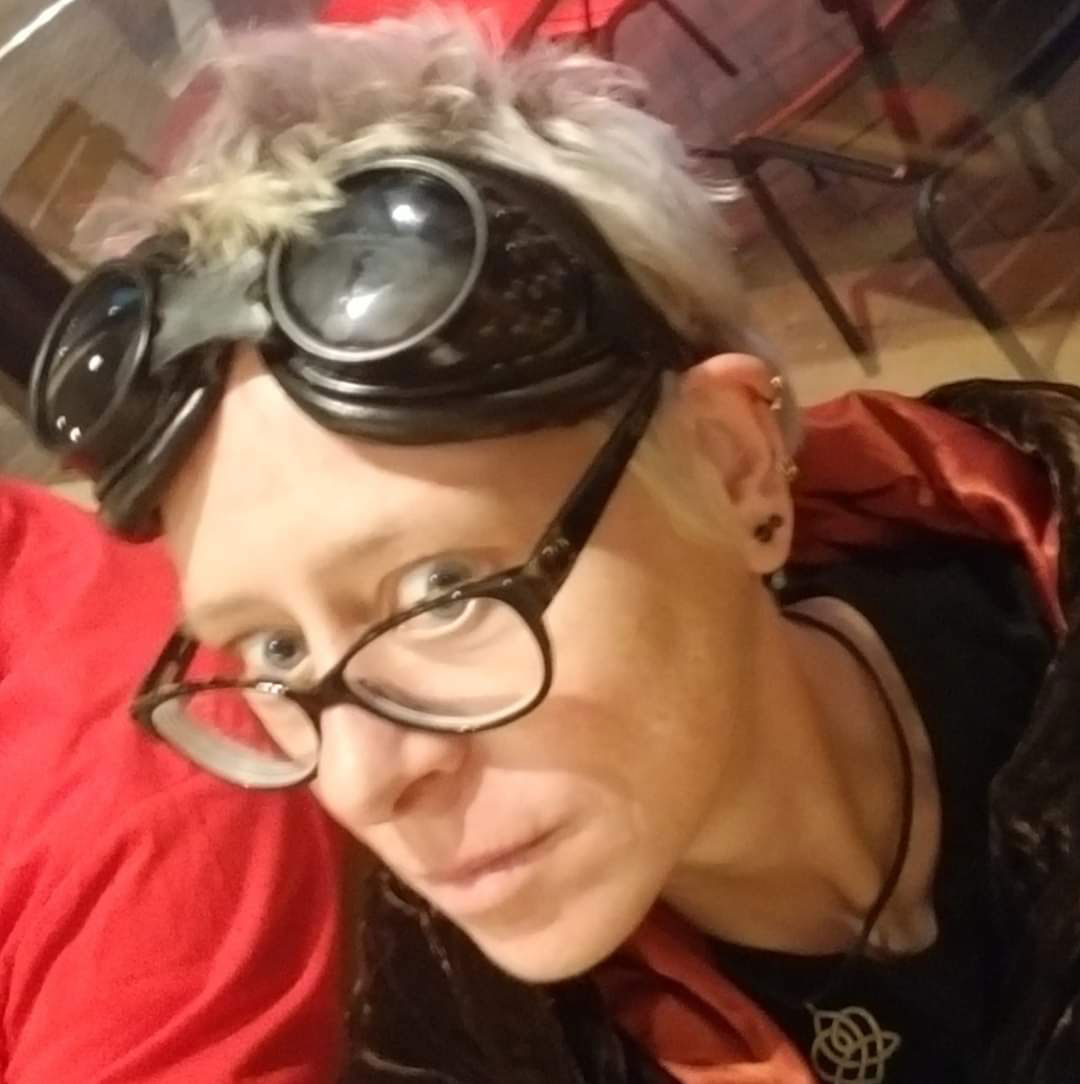 Our Member of the Month is Gina Stephens of Los Angeles, California.

Gina says: "Gina L. Stephens is a botched creation of the Mi-Go, sent to Earth in 1982 with instructions to "take care of things." The Mi-go, however, were a little vague on the details, so after wandering the west coast of the lower 48 states for a time, she settled down in Los Angeles and started a pet-sitting business. Taking care of things.

Gina discovered the writings of H. P. Lovecraft in her early 20s and felt a strange kinship with his love of the otherworldly and ancient. She picked up a set of the Selected Letters of HPL and learned all about his life and the context in which his stories were written, and eventually taught a fun class about HPL at UC Berkeley in 2004. Gina has a bachelor's degree in Earth and Planetary Sciences from UC Berkeley.

She now resides in Los Angeles, where she takes care of people's pets." 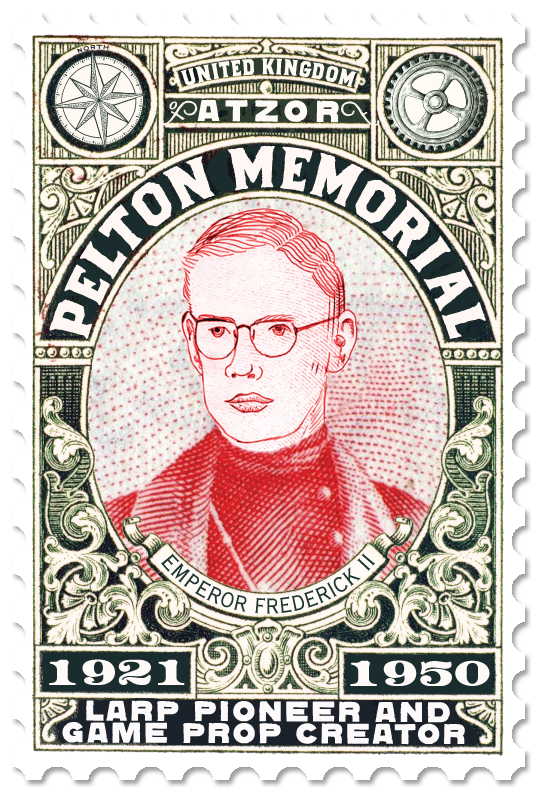 We are introducing a new bonus stamp for 2020: the Pelton Memorial. Suggested by member Christian Matzke, this stamp is in honor of Fred Lee Pelton, who was a LARPing pioneer in the 1930s/'40s at the University of Nebraska. Fred and his college friends role-played in the United Kingdom of Atzor, for which they created their own postage, currency, passports and other documents, including a dictionary of the official language of Atzor. They were profiled in a 1941 issue of Life magazine, and you can download the article in PDF form here.

Fred was a fan of the works of HPL and wrote A Guide to the Cthulhu Cult in 1946, an ambitious work of comparative scholarship. He also produced what might well be the very first prop Necronomicon ever created. The original was a highly elaborate hand-lettered and illuminated tome which now appears to be lost. Luckily, the text survived and was later published under the title "The Sussex Manuscript" by Armitage House in 1998 as an appendix to their version of Pelton's book.

Fred was born in 1921 and passed away at the tender age of 29 in 1950, after serving in the US Air Force during WWII. He was survived by his wife, Dorothy, and two sons, Fred Jr. and John. He had just been appointed as an instructor of nuclear and atomic physics at the University of Nebraska when he died of a sudden illness. We find Mr. Pelton to be an inspirational figure, and are happy to help keep the memory of him alive through this stamp. The stamp features a portrait of Pelton in character as Emperor Frederick II of Atzor. At the top of the stamp are a compass rose and a gear to symbolize the world-building he did.

In view of Fred's youthful interests, this stamp will be issued to members who demonstrate a particular enthusiasm for prop documents. This can be by making your own props and sharing them with us online or via e-mail, or by purchasing some of the various prop document products produced by the HPLHS. You can see a complete run-down in the bonus stamp section of the Member Sanctum. 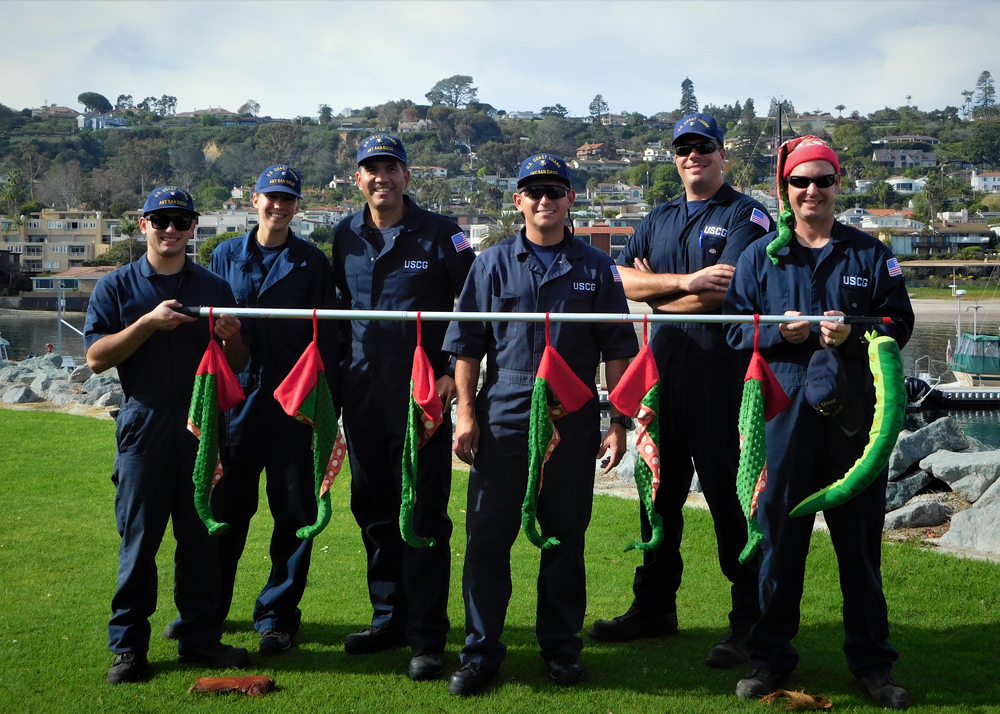 A US Coast Guard Christmas!

Shipping Shoggoth Emeritus and Dreams in the Witch House impresario Mike Dalager (pictured third from left) is a member of the US Coast Guard and works with the Aids to Navigation Team (ANT) in San Diego, CA. He and his crew boat-hooked a startling collection of solstice tentacles and Mike was kind enough to send us this photo. He says this is how they ward off Deep Ones in southern California. All in a day's work for the USCG! We are proud of Mike and grateful to his mates. 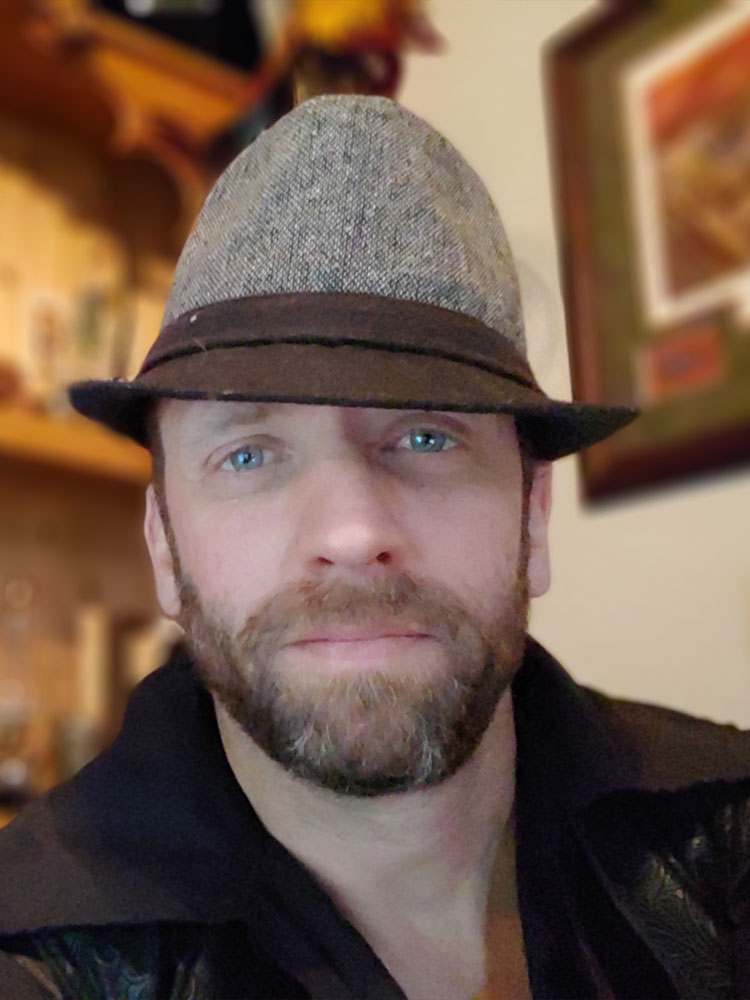 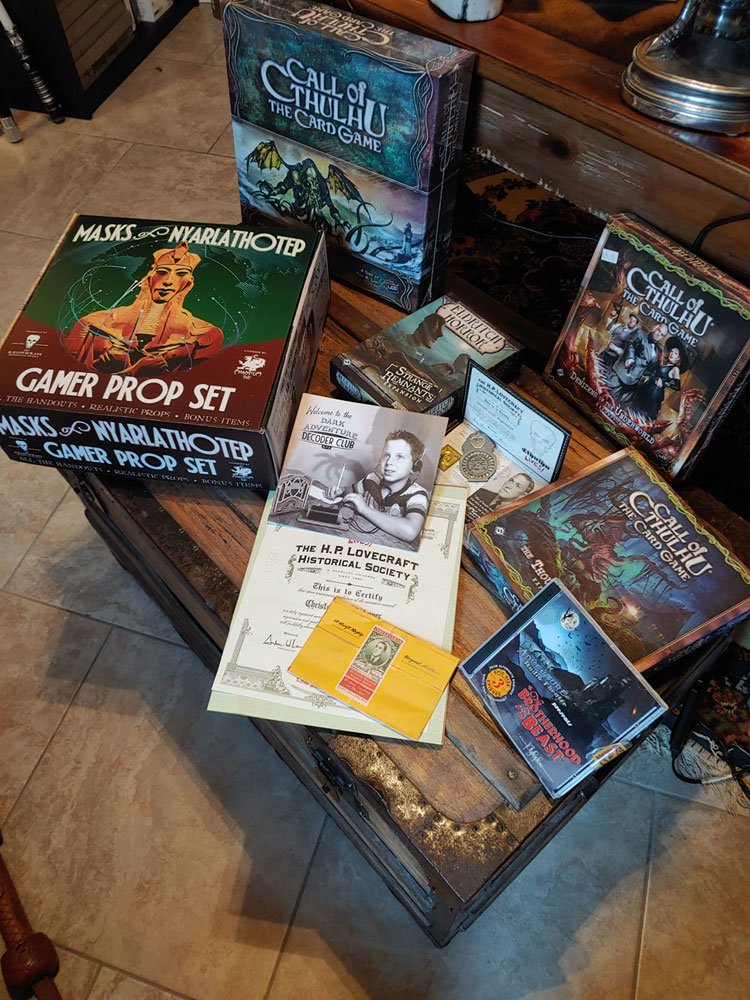 Our Member of the Month is Christopher Rightmyer of Lake Charles, Louisiana.

Christopher says: "I was first introduced to HP Lovecraft in 1988 by a close friend and his brother who had recommended The Best of H.P. Lovecraft: Bloodcurdling Tales of Horror and the Macabre. I have always enjoyed the classic horror stories and dark tales, however, when I stepped into the cosmic horrors of the Lovecraft universe there was no turning back. The repugnance of such stories as, "The Dunwich Horror" or the consternation of "At The Mountains of Madness" set my redoubtable desire for the outlandish cosmophobia. Reading the designs of his mind in books, however, was not enough, I wanted to be a part of his stories, investigating the paranormal, face the folk of Insmouth and attend classes at Miskatonic University. The game Call of Cthulhu was introduced to me in the late '80s as well, and I have been immersed in the caliginous world ever since." 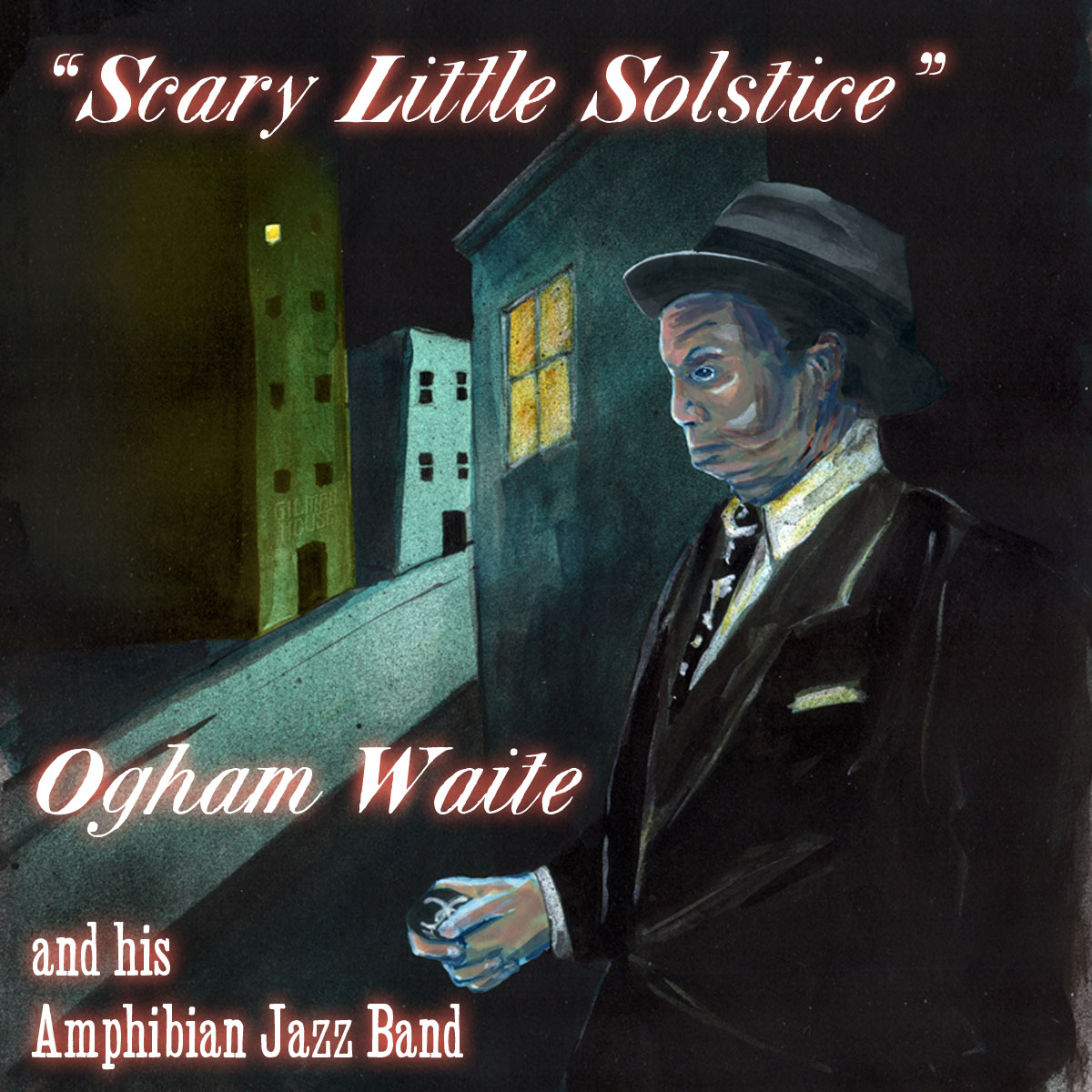 Ogham Waite is famous for being the only known Deep One Hybrid lounge singer, as those who have heard his album "Live at the Gilman House" can attest. We recently discovered an additional recording from the Gilman House Lounge, in which Ogham and his Amphibian Jazz Band cover a beloved Solstice Carol. We are happy to make it available for listening for free to brighten your holidays. We are also very proud to announce that the entire Solstice Carol page of this website is now full of fun stuff, including this song. Go check it out for other carols, samples, videos, and sheet music! Click the red link above, or select it from the Productions/Music pull-down menu above! 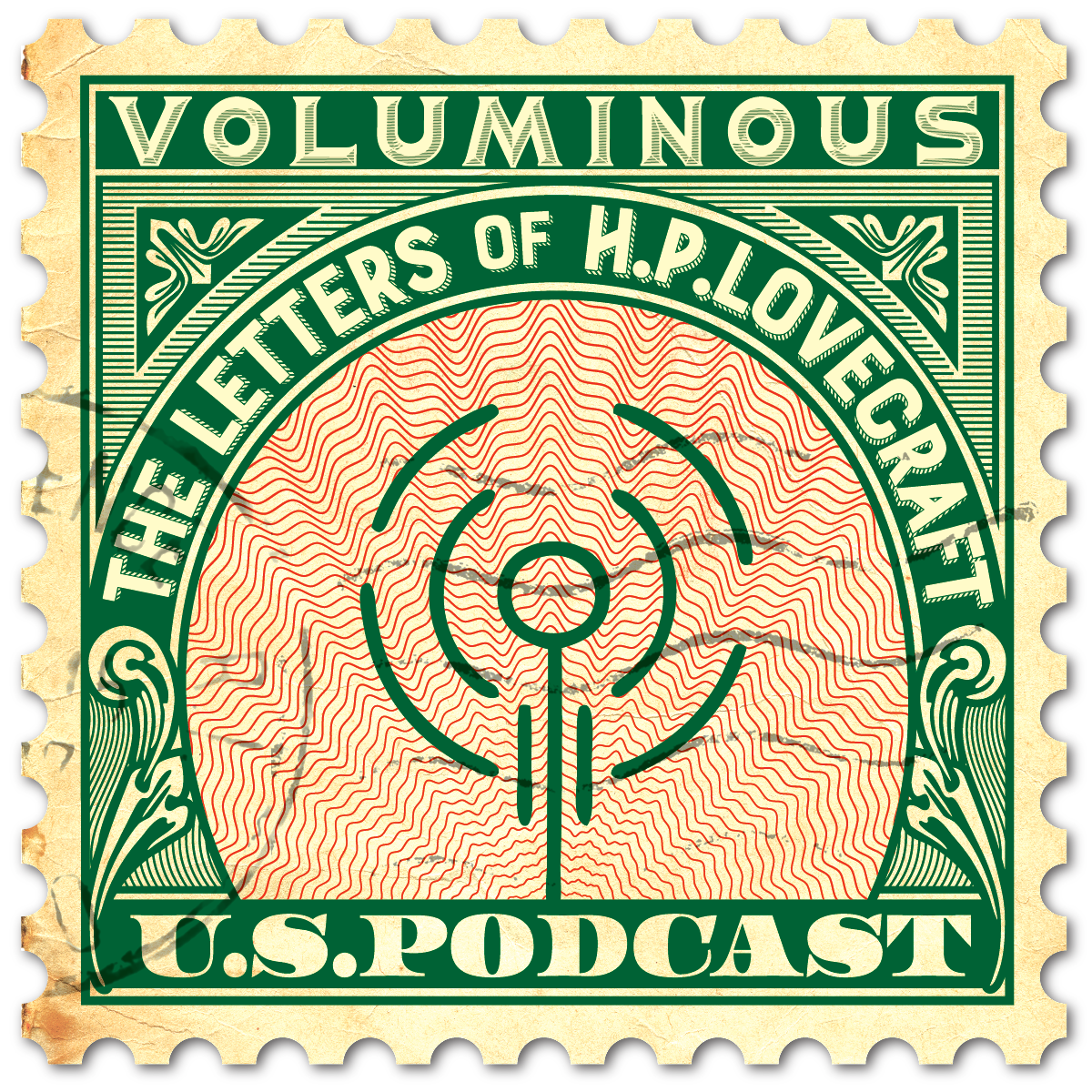 At last it can be told. We are releasing the very first HPLHS podcast, Voluminous: The Letters of H.P. Lovecraft. Each week Sean and Andrew will be reading one of Lovecraft's many thousands of fascinating letters, and then discussing it. If all goes as planned, you should be able to find it wherever you get your podcasts. You can also go check it out here!